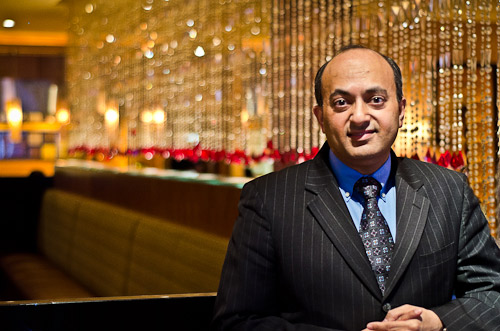 Ashok Bajaj is a restaurateur with many an acclaimed restauarant under his belt — Bibiana, Bombay Club, Oval Room, the revamped Ardeo+Bardeo, 701 — but none is more beloved than his Penn Quarter gem Rasika. It is also by far the most difficult Bajaj restaurant at which to score a table, thanks to years of rave reviews from Washington's food critics. So how early do you need to start thinking about booking that reservation? Eater chatted with Rasika general manager Atul Narain, who offered some advice on how to get a table and what kinds of VIPs you might be sitting near in the dining room.

Say it's 8 p.m. on a Saturday night. What's the wait to get a table?
It depends. We have casual area seating where people walk in. Some people are fine dining in this kind of space. We also have seats at a sushi bar-like counter at the back. The bar offers the full menu, too. So there are casual area seats. We book up all our tables, we don't keep any tables for walk-ins. But if any tables come along, we offer them as people walk in. But waits can vary. It's difficult to predict it. But it could be 20 minutes, could be an hour, it depends what's happening at the restaurant at that time.

How quickly does the main dining room fill up?
People are booking about seven to eight weeks out for weekends, Friday and Saturday nights. And for the rest of the weeknights, I would say about two or three weeks out. If you're looking at anything at peak time, which is everybody's preferred time, say 6:30 or 7:00 on a Saturday, those are the slots that get taken up probably almost a couple of months out. At least eight weeks out. But if you're open to dining at 9:30 or maybe at 5:30 you might still get lucky with those.

Is there anything I can say or do to make my wait shorter?
Nothing as such. You know, because people are waiting here so we just follow the procedure in which they come in. For the casual area, we give estimated wait times. There are times when people leave earlier than anticipated, if there's a table available we lay out an option. Whatever works for the guest.

Has anyone tried to slip you money or gifts to get in?
Some people do that, but when you're in a tight spot you really can't do anything. It's very difficult when you have a full house and people are waiting around. Being able to sneak anybody in is almost next to impossible.

Do you have any funny stories?
We've had funny stories where people in this casual area just go and sit down and they say, "Nobody told us that this area people are waiting for." But we take names down in this area, so we may have a lot of people standing at the bar and somebody sees a table and jumps down there and takes it and says, "Nobody told me so." You may get into an awkward situation there. We've had some people who are a little difficult to handle. But by and large it works out well. People do appreciate that we are taking names and seating them in the sequence that they came. Otherwise this area is first-come, first-served. That's what a lot of them will say, "You said first-come, first-served. Well here I am." It doesn't quite happen that way.

How do you deal with it?
You have to be kind and patient with them. But most people do understand logic and they do appreciate the fact that we are trying to seat people best. A lot of people do walk in at 5:30 and they might see an empty restaurant and they think we are not taking in guests on purpose because we are full in the dining room. So some people may show you attitude and walk away. Some may take this area as an option. But if they are here to see the restaurant fill up then they do understand and they believe what we told them. Our first dialogue is to tell them, "As empty as it looks, it is going to be a full house." Because a lot of people do not believe you when you tell them that it's going to be a full house very soon. It's difficult to imagine, you walk into an empty restaurant very early and it's not full at that point, but it does fill up pretty quickly.

Anyone in particular?
There's so many celebrities who have been here. We've had the First Lady here twice for dinner. We've had Secretary Clinton. We've had President Bill Clinton with her. We've got a list of a lot of senators and congressmen who dine here all the time. A couple of movie stars. None of the really big ones.

And so what do you do when you have a VIP come into the restaurant but there aren't any tables available?
Most of our VIPs would call ahead. There are times when we don't have anything, so we take their names down and we have a list of people who we can call if we have any cancellations. If that were to happen then we'll give priority to our VIP guests. But there are times we are able to recommend our sister restaurants, The Bombay Club or 701 in the neighborhood. 701 is a different cuisine, but the Bombay Club is Indian food. So all that helps.

And what's the most outrageous request that you have not been able to accommodate?
There are times when people ask for flowers and cakes and stuff like that on the tables, so you have to tell them we don't do any of that. Like for birthdays and special events. Generally things like that. It's not quite outrageous. None that I can think of right now.

Is there anything outrageous that you have been able to do?
Not really. People make requests of special menus. I think a lot of restaurants would do that. If somebody has a special event or they're celebrating an anniversary and stuff. We have done those. Some people want menus without prices on it so that guests do not see. So those kinds of requests are very easy to do and we are happy to do those. But I can't really pinpoint anything really outrageous that people have asked us.

So where are you eating when you're not here?
I spend time with the family. I have three kids, so I eat mostly at home. And kids dictate where you go, so you would be eating in whatever outlets they are comfortable in.

Were there any times when you felt like you were going to lose your cool?
There are moments when you would have those kind of situations, but you know that you need to calm yourself down and not get into an excited state with people. But generally speaking I would say staying cool and collected. Just because this is kind of the hub of the restaurant — everybody comes into the restaurant at the host stand and that's the hub for the restaurant so you kind of dictate the pace of the restaurant from there on. So it's a way to control how the evening is going to go. It's kind of a balance act, so it works out well.

A Guide to D.C.’s Most Festive Holiday Bar and Restaurant Pop-Ups