All the latest neighborhood and real estate news from Curbed DC... 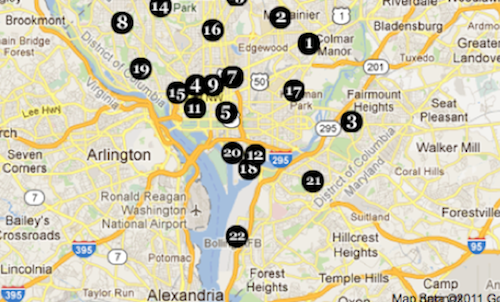 DISTRICT—The most popular post of the week by far was our new Sales Heat Map that shows the December closed sales prices for DC houses, broken down by zip code. There were about five hundred sales overall.

PETWORTH—It seems to be an ongoing battle between Brightwood and Petworth when it comes to each week's Under 300K Club, but Petworth won the toss this week.

KALORAMA—Jon Huntsman has a $3M house in this neighborhood that he bought after it was used to shoot the DC season of Top Chef. Click over for the listing pictures.

THE MALL—Now the National Civic Art Society has got some objections to the Eisenhower Memorial planned for the Mall and they're getting ready to deliver a book-length document outlining their concerns with the project.

ADAMS MORGAN—There are two new condo buildings collectively called WY18 that are selling now, with move-ins expected by early February. Some early photos are over on Curbed.