Smith Commons' First Year and the Growth of H Street

Share All sharing options for: Smith Commons' First Year and the Growth of H Street 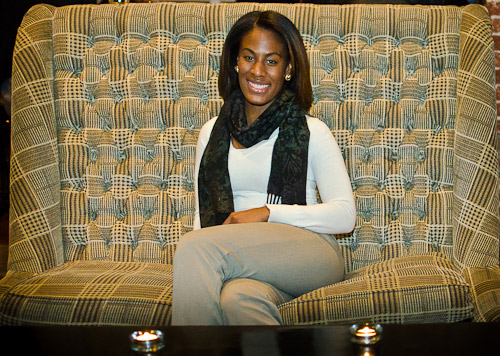 In 2010, Howard alums Jerome Bailey and Miles Gray teamed up to turn an old carpet warehouse into the surprisingly cozy, multi level-multi purpose establishment, Smith Commons. Eater sat down with assistant GM Anna-Marie Ashe to talk about opening up a restaurant on New Year’s Eve, dealing with construction hiccups—like having a car drive through the first floor bar, chef changes, and the growth of the H Street corridor.

How did the concept come about?
Miles Gray, the managing partner, essentially went around to different places like New York, where they’re well established in their restaurant industry, and seeing how popular it was he wanted to bring it here. It’s kind of a cool house, you want to sit around and lounge for a while. He wanted that concept in DC, where it’s not strictly a restaurant but also a lounge and hangout spot.

What was the design process like?
We had an interior designer, Tynesia Hand-Smith from Design 36ixty, she came up with the storyboard and showed us a lot of different types of chairs, styles, and patterns. She knew the basis of it was natural wood, exposed brick and exposed air ducts but then added the houndstooth chairs for contrast. The lighting aspect is huge as well. Our second floor is pretty dim and that’s to create a more relaxed atmosphere. We thought that adding the hanging globe lights would add something different.

How long did the buildout take?
About a year. They started in January and ended December 31st and that’s when we opened to the public.

Any major hiccups?
There actually was one large one. A car drove through the first floor bar. They went through the brick so they had to fix that immediately. Luckily the whole bar system wasn’t created yet, it was just the outlay of it, so draft lines weren’t destroyed or anything like that. Luckily that hasn't happened again and I pray that it doesn’t happen again.

What was it like opening up on New Year’s Eve?
It was crazy. Opening up a restaurant in an area that’s not that well established with restaurants yet, we didn’t know what type of crowd we were going to bring. We were just waiting, anticipating. And it went well. There were a lot of things going on behind the scenes, but as long as the customers don't see it everything is good. There was a lot of anticipation. When we opened up those doors people were camping out.

Were there any worries about fully using such a large space?
We knew that we could utilize the three floors well, with not only dining but also patio space, and meeting space. The main worries we had were in trying to find a happy medium with the neighbors. We had to be careful where we placed our speakers, and how late we kept the patios open because a lot of people have to work early in the morning. We tried closing the patio at 2 a.m. but we decided to bring that back to about twelve o’clock because we want to be respectful of our neighbors.

What was the response from the neighborhood?
We had to feel it out, see what would work and what wouldn’t. The neighborhood loved us being here. A lot of people say that their property value went up because of the fact. Like I said the music thing was maybe an issue in the beginning so we had to figure out what time to close the patio and how to let our customers know without seeming abrasive. But people respect that, they understand.

How was the menu-planning?
We have two menus: a bar menu and a dining menu and we rotate it almost weekly. We do have particular items that are the best sellers, like the Smith burger, crab cakes, and sliders. We realize which ones were the staples and we keep those on the menu and rotate other items. People like to see different things, try different things. Our chef, Carlos Delgado, is from Peru and he puts that influence in it as well. He also likes to dabble in molecular gastronomy so he’s got foams, gels and powders and fun stuff.

You went through a chef change in your first year; tell us a little about that.
We did work with Chef Frederik De Pue and he brought the European flair. [He] had a particular menu that he thought we should keep on a regular basis, but Carlos had the mentality of giving people something different every time they came in. He wanted to be more creative. He’s young and he wants to experiment. So that was the difference. He came aboard almost a year ago and he started asking us what we were comfortable with. He didn’t know if he was too outlandish. He had beet ice cream and we were like, “Do it. Try it out.”

How was it when the reviews came in from the critics?
That’s always kind of a nail-biting situation. Tom Sietsema did his First Bite here and we didn’t know when he was coming but we were like, “He’s coming soon guys we want to make sure that it’s perfect.” The reviews were good but obviously you’re going to have the people that don’t like the food. Say you have mac and cheese and it’s not what they’re used to so they may not like it. You can’t appeal to everybody but we try to have enough different items so that we can appeal to the majority. We go through the reviews every week to see what people want. It’s important because we want to make them happy.

Were there any other big alterations that you made in the first year?
Well it’s the first restaurant for both owners and it was the first restaurant that I opened from the beginning. So it was trying stuff out and if it didn’t work we’d tweak it. We have our kitchen down in the basement. We don't have elevators so that’s the kind of thing we had to strategically plan before we opened and while we were in operation as well, to see the most effective way of getting the food up and hot. Learning that maybe we can’t do dinners on the third floor because there’s too many flights of stairs and we don’t want the food to get cold so we’ll just do passed hors d’oeuvres, things like that. Trying to see what will work for our space because it can be a challenge sometimes.

How do you think H Street has changed in the last year?
I came to look at the establishment before they bought it and there was none of the lighting that they have on H Street now. People feel safe walking down the street now. I hear from a lot of people that live in the area who say how much it has changed and how fast it’s changed. There are like six new restaurants coming here in the next six months so people are jumping aboard quickly because they know that this area is changing for the better. New businesses are coming in to make a different type of H Street than what it was maybe four years ago. It’s good competition for us and it’ll bring more people to the area so I think it’s for the better.

Does it feel like it’s been a year?
It doesn't. It flew by. A year in a job to me feels like three years, and this is the first job that I really, really enjoy. I like the challenge of it. Like I said the issues that we’re working up against on H Street, the changes, being flexible, the residents, the whole nine. It’s been enjoyable I must say. We’ve learned a lot and now we can pick up the processes that we’ve created here and take it somewhere else.

Do you think that’s in the future?
I do. We have a running machine at this point so we can utilize our processes in other places. The particulars of what the owner wants to do I’m not positive about yet, but I know that he does want to expand.

For more One Year In posts published today across the Eater Universe, head over to Eater National.