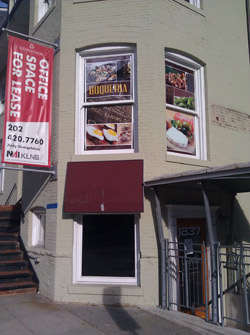 1) Dupont Circle: The last we heard from New York tapas restaurant Boqueria was that their forthcoming Dupont Circle location would be opening sometime in late January. Well, according to some Craigslist ads seeking front and back of the house employees, the target is now sometime in February. In the meantime, there are all kinds of posters plastered in the windows hinting at what's to come. [PLYWOOD]

2) Van Ness: Prince of Petworth reports that Sushi Para is just weeks away from opening in the old Taco Bell space on Connecticut Avenue. [PLYWOOD]

4) Ballston: ARLnow notices a liquor license application for Florida-based chain World of Beer out on Glebe Road announcing a "neighborhood, non-smoking, upscale social establishment dedicated to the enjoyment of beer and education of the beer enthusiast." The chain's other locations typically don't serve food, apparently, but will have a not-too-shabby 50 beers on tap and another 500 by the bottle. It seems they're aiming to open in July. [PRE-PLYWOOD]