Share All sharing options for: Barack Obama Takes Supporters to Lunch at Scion

Here's the latest in presidential outings: President Barack Obama took a group of supporters who won his "Lunch With Barack" fundraising campaign out to lunch at Scion in Dupont Circle today. ABC News has a full report on the lunch and notes that the restaurant was cleared out for the president, just as at Liberty Tavern when he held a similar supporter dinner back in October.

It's an interesting choice for sure, given that Scion is far better known for its hefty list of craft beers and its table taps — earning the approval of many a DC beer nerd. It is also far more under-the-radar dining-wise than most of the other spots POTUS has visited. But maybe not for long with this new presidential endorsement? At any rate, the restaurant seems excited and owners Joanne and Julie Liu posted a photo to the restaurant's Facebook page of some menus Obama signed for them. 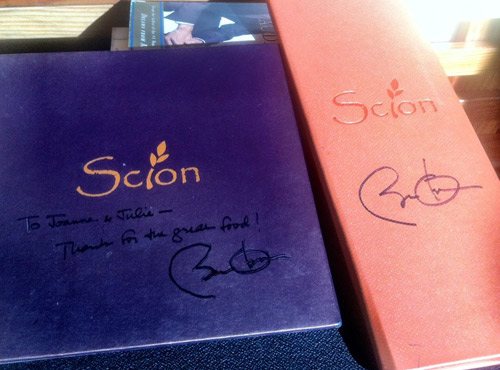