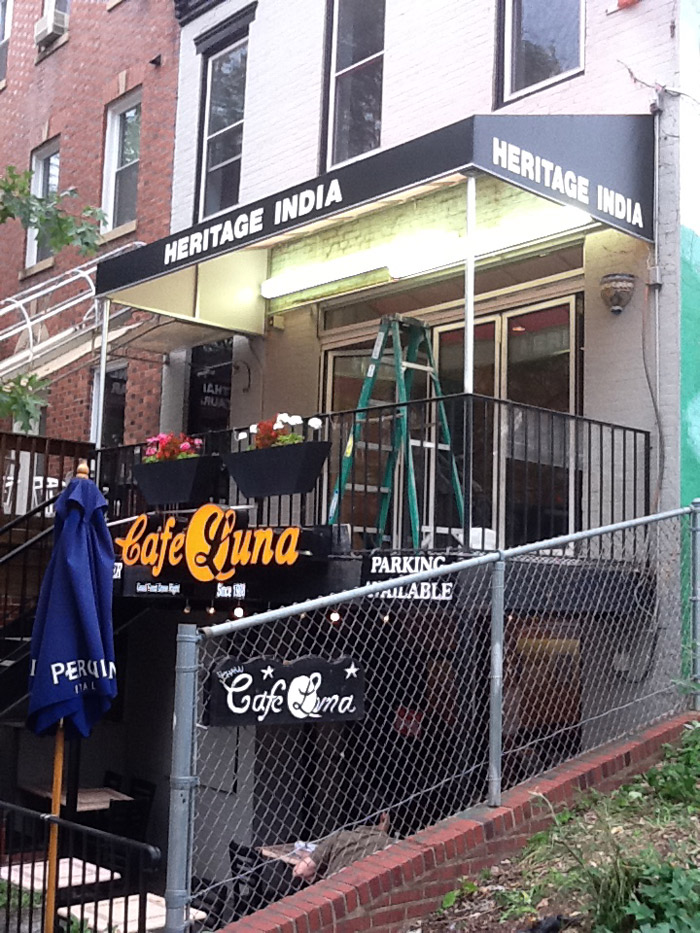 1) Dupont Circle: Behold a new location for Heritage India, which closed its doors on Connecticut Avenue earlier this year. A tipster spotted signage going up over the weekend in the Skewers space above Cafe Luna. Eater spoke with a manager who said they're hoping to open by this weekend. And what about that other Heritage India space reportedly headed to 19th and Pennsylvania? Well, he says, it will be another six to eight weeks until that location opens. [PLYWOOD]

2) Union Station: Prince of Petworth reports that Crepe Lena is moving into the lower level of Union Station's food court near the forthcoming Burger King — and a reader points out that the creperie has had a cart upstairs in the train station for some time now. [PLYWOOD]

3) Ballston: An Italian restaurant named Il Forno is moving into the Virginia Tech Research Center building in Ballston, according to ARLnow. The restaurant is importing its pizza oven from Italy and hopes to open in January. [PLYWOOD]

4) NoMa: PoP has it that Thaaja Indian Food Bar is opening in the Courtyard Marriott, a fast-casual Indian concept with customizable bowls, wraps and salads. [PLYWOOD]

5) Courthouse: Patch reports that Sweet Leaf Café is expanding to Courthouse after looking around Arlington for a space for about a year. The café is deli-style "similar to a Panera," per the owner, and hopes to open in early February. [PLYWOOD]

6) Tenleytown: Once again, PoP has the news that Firelake Grill is opening in the old Ruby Tuesday space at Van Ness and Wisconsin — and notes that the space appears to be completely gutted. [PLYWOOD]

7) Arlington: ARLnow brings word that a restaurant named Sultana Grill is taking over the Castro's Bakery space in Bluemont. It'll serve Mediterranean cuisine and hopes to open as soon as this weekend. [PLYWOOD]