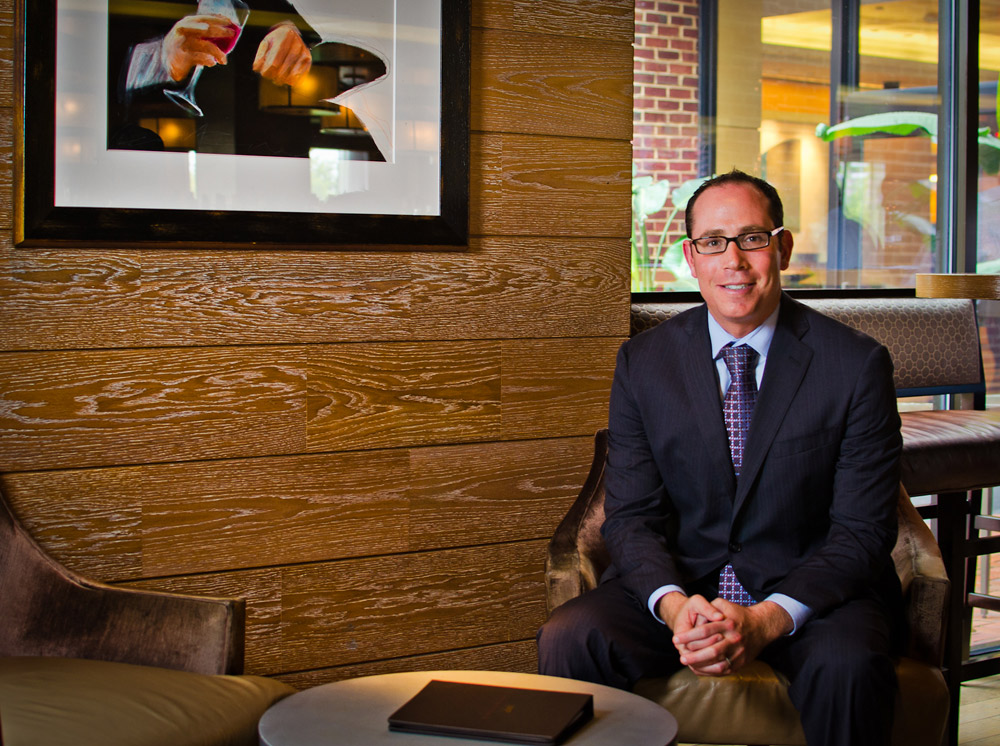 Since opening in 2008, Georgetown's Bourbon Steak has played host to scores of bold-faced names, from Steven Spielberg to Brangelina to Cher. And now the Obamas — the ultimate DC celebs — have paid a visit too, dining at Bourbon Steak for their 20th anniversary last week. But unfortunately for gossip lovers, stellar general manager Mark Politzer won't dish about any of his guests, famous or otherwise. We caught up with Politzer prior to the Obamas' meal, and while the Four Seasons' strict privacy policy kept him extremely tight-lipped about VIPs, he did share some wild guest requests and his favorite, celebrity-approved tables in the dining room.

What if there was a long wait, is there anything I can say or do to make my wait shorter?
No, not necessarily. We're pretty consistent. If someone walks in and they don't have a reservation, we're going to do the best that we can. It's the philosophy of the restaurant. We're here to do whatever we can for the guests. It's not something you can say or do, it's more what can the restaurant really accommodate in terms of seating. If we have a seat available, we're going to get that person in.

Has anyone ever tried to slip you money or gifts?
People have done some wild things. I'd rather not share those wild things. But as I said earlier, be it a $20 bill or $30, that's not really going to change our perspective.

How far in advance should people make reservations for a specific date?
At least a month in advance, if not two. If it's an anniversary or a special occasion and you know you're going to come to Bourbon, make the reservation early so you get the time slot that you really want.

Do you have any favorite seats in the dining room that you'd recommend?
Table 105. It's a booth in the corner, so it's one of our more romantic tables. Or table 89, it's also a corner but you get to see a lot of the action in the kitchen. And table 105 is far removed.

Have any VIPs sat at that table?
Oh yeah. We can't really talk about the VIPs, but a lot of cool people have dined at Bourbon Steak.

Together?
We've had a lot of couples.

You've obviously had a lot of high-level guests. Is there anything you do to prepare for their visits?
The great thing about Bourbon Steak is that it's a restaurant that's really trying to always push our concept forward. With that, it prepares the staff to always be on edge. And depending on how we roll out our new menu items, a new cocktail — we just changed out our cocktail program to prepare for the fall — they're always learning and developing themselves, so to have a special guest or VIP, it's kind of no sweat at this point. Theoretically, they should always be on their toes anyway.

What's the most outrageous request you haven't been able to accommodate?
Dinner on the roof of the hotel. He wanted to see the sunset on the roof. We did a dinner on the patio and you can kind of see the sunset, but that's the closest thing we could do. We would've done the roof, but it's gravel on there and we don't have a license. And there's no elevator up there anyway. But that was probably the wildest request.

Are there any requests you have been able to accommodate?
We've delivered cosmo mix to a local guest in Georgetown who really likes Duane [Sylvestre]'s, our bartender's cosmo. We delivered that to her, just the mix, not the alcohol. We recreated people's anniversary dinners who had their wedding at the Four Seasons thirty years ago.

And where do you eat when you're not here?
I'm a really big fan of Woodberry Kitchen. They do a great job.

What is the one Gatekeeper tool that you need to do your job?
Open Table is huge. Or a reservation management system. It uses technology to record guest's profiles, what they like, what they don't like, what tables they like to sit at. If you're having a bad day or a great day, it's all there. It's much easier than it was 15 years ago when I started in this industry, with the book. You had to rely on the waiters to remind you, or remind yourself, who's coming in, where they like to sit. When I was working in London, there was an urban myth that a disgruntled waiter took that book with him from a three-star Michelin restaurant. So all the fine dining restaurants, the managers locked up their book at the end of the night.