A Sneak Peek Inside Matchbox, Now With Floating Tables

Share All sharing options for: A Sneak Peek Inside Matchbox, Now With Floating Tables

Last month, Matchbox Food Group offered up five new facts about their forthcoming 14th Street location — including that it will have a permanent takeout station, three levels "with each level overlooking the previous one" and patio seating with a fire pit. So what does all that look like? Construction is still underway, but Eater got an early look inside at this new Matchbox location's dueling floating tables, kegged wine, pizza bar, and future site of a C-shaped table for group dining. Plus, the group reveals some intel on how the menu is shaping up for the restaurant that aims to be open in time for the presidential election.

Restoration: The Matchbox team worked to restore the 1907 building to its historic value, meaning a restoration of the red brick facade and replacement of a bay window that had been removed in the 1920s when the building was used as an auto showroom. In an homage to Club Bali, which hosted performances from the likes of Louis Armstrong and Billie Holiday during the 1940s, the Matchbox team is considering hanging old photos from that period. During demolition, a rep explains, the team found an industrial vibe to the building that matched the restaurant group's aesthetic, so instead of hiding the steel girders, they painted them Matchbox colors.

First Floor: To the left upon entering is a winding white pine staircase, while to the right is a elevated seating area. This location has a fairly open bar space and what reps describe as the biggest bar of all of the Matchbox outposts with 17 seats at the bar, high-top tables in the bar area and then an eight-seat pizza bar overlooking the ovens and the open kitchen. The dining room will mainly offer four-tops and booths, plus a large round table and a yet-to-be-built novelty group table that is difficult to explain but essentially will look like three long tables stacked into a C shape.

Second Floor: The future hardest seats in the house to land are going to be the two "dueling floating tables" that hang from the second floor, overlooking the bar below. These are essentially the same very popular Matchbox cube tables from the Capitol Hill and Rockville locations, but suspended to make it seem as though the booths are floating. Yes, there will be protective glass to keep diners from falling out. Otherwise, there are about 90 seats on the second level. 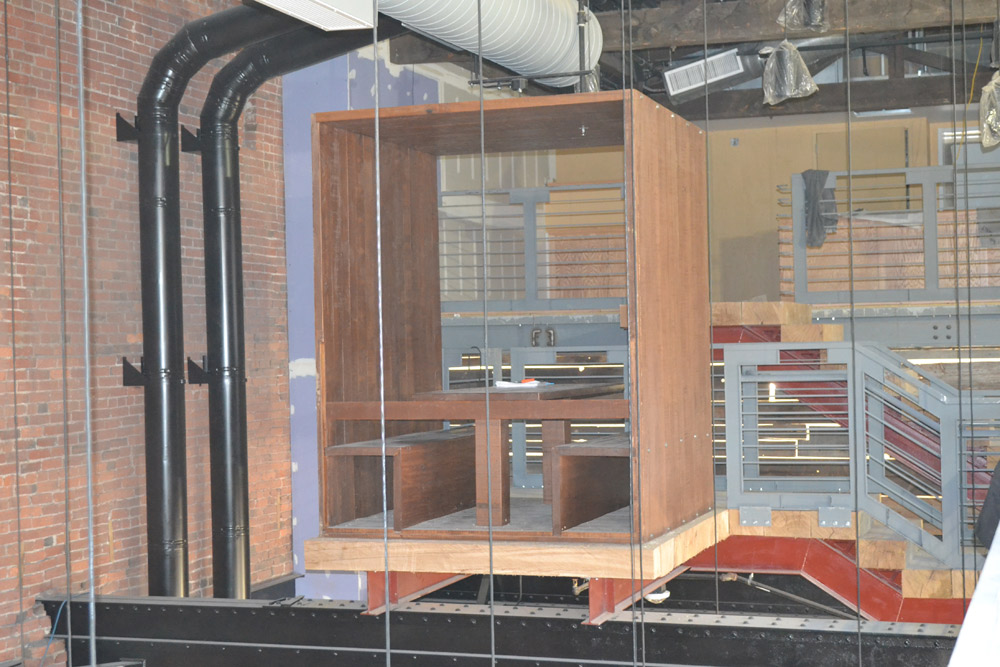 This table is floating.

Third Floor: Located at the back of the building, the third floor overlooks both levels below. There's limited space for seating here, but reps expect it to be good for group dining and possibly even a future for private event space if the neighborhood calls for it. There's a service station on the third level that could be used as a bar, too.

Outside: The Matchbox patio will be located along the T Street side of the building, with 60 seats in total — 8-10 of which will be located around a fire pit that will sit at the corner of 14th and T streets. There's also going to be a designated carryout entrance on the T Street side of the building so that takeout diners don't have to walk through the entire restaurant to pick up their pizza.

Menu: There are going to be 23 beers on draft, both European imports and also local craft beers. Matchbox also intends to offer both wine and prosecco on tap — four reds, four whites and one prosecco. While Matchbox is taking the most popular items from its other locations — so definitely those mini burgers that are the group's signature — this location will have some of its own options, such as coconut curry short ribs or honey-miso salmon.