All the Intel on Barack Obama's Smith Commons Dinner

Share All sharing options for: All the Intel on Barack Obama's Smith Commons Dinner

Rumors from Friday that President Barack Obama was headed to Smith Commons for dinner were absolutely correct — as they usually are given the massive security presence required for presidential excursions. Obama took the final group of winners from his "Dinner With Barack" fundraising series out to dinner at the H Street NE restaurant. It was Obama's second time visiting the neighborhood for dinner, having dropped in on Boundary Road back in March for a previous edition of the "Dinner With Barack" contest. While, as usual, no one's really talking specifics of the dinner, here now is all the intel about a presidential outing to H Street — and how it affected neighboring restaurants.

1) The security presence on H Street was noticeable earlier in the day, with Sticky Rice pointing out that there was no parking available due to a VIP visit, which led to much speculation as to whether it would be the President and, if so, where he might be going.

2) According to White House pool reports, the three winners of the fundraising dinner — all from battleground states — each brought a plus-one, making for a total of six diners plus the President. First Lady Michelle Obama did not join the group this time as she has at previous dinners in the contest series. They arrived at 5:40 p.m. and the Associated Press has some raw footage of Obama chatting with the winners at a long table.

3) There's no word on what President Obama ordered at Smith Commons, although Obama Foodorama points out that the restaurant does indeed have a burger topped with caramelized onions, bacon, and Chipotle mayonnaise that was "more than likely the President's order" given his burger predilection. Conservative commentator Laura Ingraham wrote on Twitter, "Hope Michelle approves the menu!" Now word on that, but apparently Obama liked whatever he ordered, writing "Great food" on the autographed menu that Smith Commons posted on Facebook: 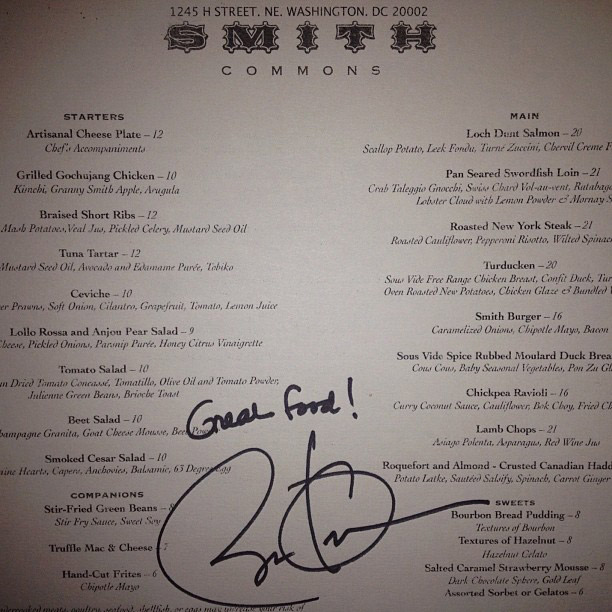 4) So how did the Obama campaign pick Smith Commons? Well, H Street denizen Margaret Holwill shared one potential explanation: "Former manager @SmithCommonsDC works for 40/40 so maybe Jay-Z recommended." The Washingtonian talked to managing partner Miles Gray, who said, "We got lucky, but I'll admit—we were doing everything we could to make the White House aware that our door was always open."

5) The Washingtonian further reports that Smith Commons plans to offer its current menu through Election Day, now calling it the "Dinner With Barack" menu. The restaurant also hopes to serve honey ale on election night.

6) Finally, what was it like for other restaurants on H Street during the two or so hours that President Obama dined on their street? Here are some PSAs from Toki Underground and Granville Moore's, beginning with a request for patience from Toki:

But then Granville Moore's also points out the hazards of such a visit:

But, in spite of all the security, maybe it wasn't such a bad thing: 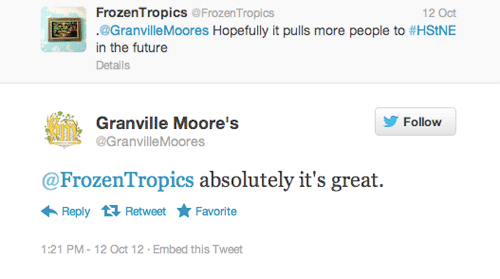