Enzo Fargione Talks About the First Year at Elisir

Share All sharing options for: Enzo Fargione Talks About the First Year at Elisir 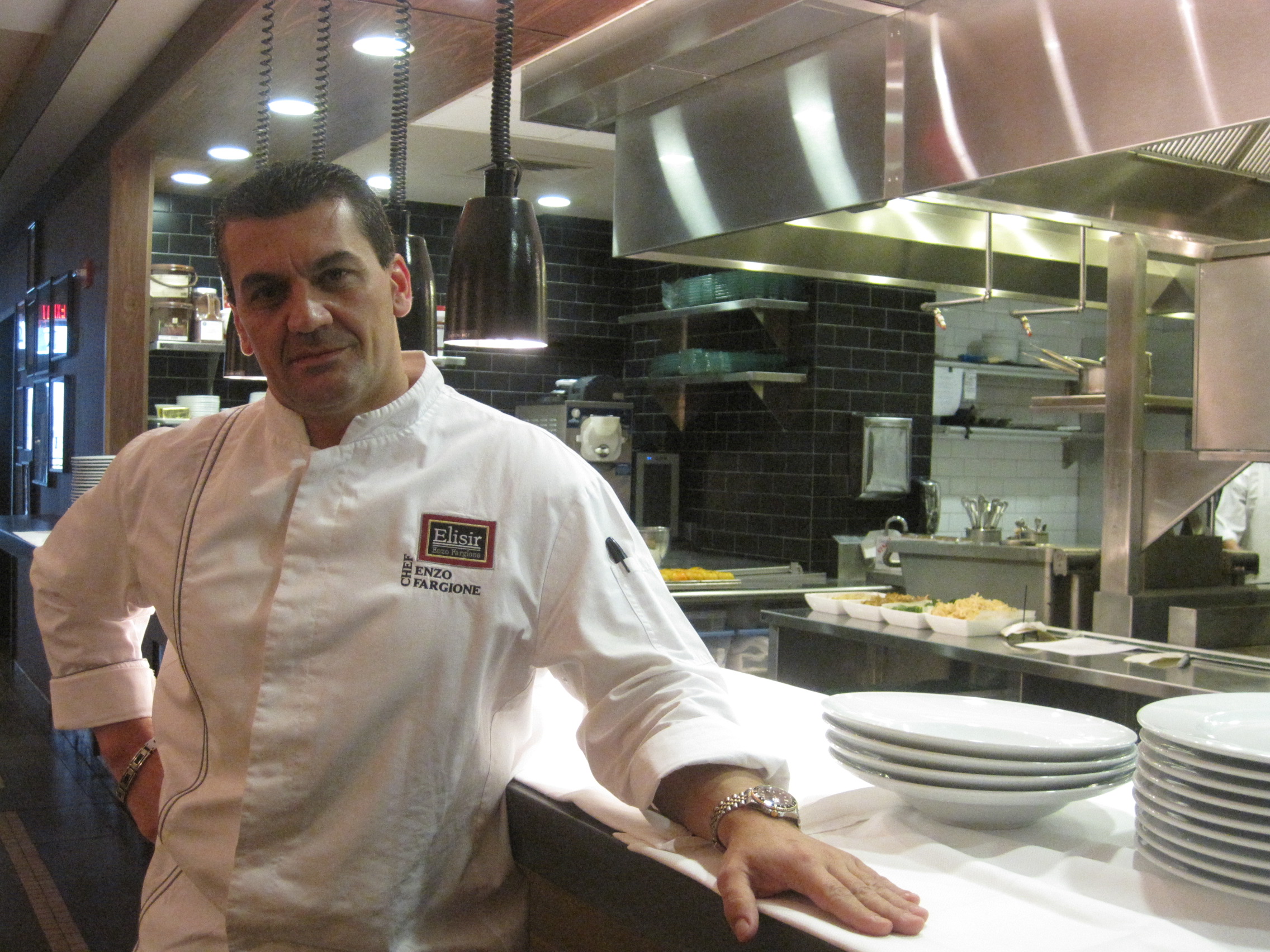 It's been just about one year since Enzo Fargione opened Elisir, one of a couple of tasting menu-centric restaurants that opened in the D.C. area back in 2011. The restaurant from the former Teatro Goldoni chef opened with a splash and a little controversy (some customers chafed at the 29 cent charge for filtered water, a policy the restaurant quickly dropped).
Over the past year, chef and proprietor Fargione has adjusted his tasting menu courses, added more a la carte options, earned a big Rammy nomination and started work on a cookbook. Eater caught up with the chef to discuss Elisir's first year.

When you first decided you wanted to open your own place, was Elisir what you had in mind, or did that evolve later?
No, the concept has always been the same. We were trying to offer something that was unique, applying all the right techniques and not taking any shortcuts. Our goal was to deliver something to the area that was unique and consistent. Nowadays, there are only a few restaurants around the metropolitan area that do an excellent job of being very consistent.

Was it hard to open something like that in a tough economy?
Many restaurants out there are scaling down, not on quality but on concept. I don't want to say they're becoming more affordable, but they're trying to be more appealing to the public. We have across the board realized that it's a very, very hard business. It's hard to have a full house, hard to do something that will stimulate people.

What efforts did you take to overcome that?
The amount of work we do right now in the kitchen is remarkable for many reasons. I'm not saying we're better than the others, but we take a lot of pride in what we do with each dish. For example, people love beef, we have a ribeye on the menu. So we want to select the best possible beef, price it accordingly, and put a lot of work into the item. We portion it, we marinate it, we sous vide it for 8 hours. It really cooks slowly and tenderizes in butter and shallots. We fire it when it's order, sear it, and serve it with three types of accompaniments. So there's a lot of labor involved in each order. And so far it's working out well.

How have the tasting menus changed since you opened?
The tasting menu trend is not as much in demand as it was two years ago. One the one hand [tasting menus] can be very limiting, but there are also great rewards that come with it. It's very personal, almost like a meditation.
When we started, we offered two tasting menus, 10 course and 7 course, and a very limited a la carte menu. Six months in, we listened to our customers, who said they didn't want as many extended menu choices. Anytime you tell someone how much they should pay, how long they should sit, what they should eat, you run that risk. And that clashes with a chef's ego. But I'm surrounding by very good people, and we decided to eliminate the 10 course menu, and we've now added a five course menu and more a la carte choices, so if the next week, someone wants to come back in and just have a salad and some pasta, they can do that.

Was that hard to do?
I mean, I'm a chef, I want all the medals. But I also love it when a business who actually runs better, so it's good in the end. Sometimes chefs forget that first and foremost, the restaurant is a business. And I think that if any word should be banned in the restaurant business, it's "no". My staff are trained that with even the most awkward or seemingly insane request, you're not supposed to say "No, we cannot do this."

What other changes are in store for the restaurant?
We're looking to redesign the whole bar program. When we first opened, we didn't offer brands like Stoli, etc. We want to do a menu just for the bar where the food is more affordable, where you can get a couple of drinks and just a bite to eat. And we're doing to do a happy hour. We were against that in the beginning because there's this urban legend out there that a restaurant is supposed to clear a profit. But I would call it, not a rude awakening, but a conscious awakening, that there's no reason you can't offer some mid-range products with the same kind of passion, the same kind of drive.

How's lunch business compared to dinner business?
Our lunch is very different. Every check is priced at $25, and we strip the tablecloths and offer a more simple menu. People can be in and out in 45 minutes; it's more like an Italian bistro. We also have a $19 two-course lunch menu in the bar, it's a great deal.
It's been pretty steady, but down in the summer. That doesn't make you happy; you have to adjust. But it humbles you, and that's why things like Restaurant Week take place.

Have a lot of the dishes you made at Teatro or at the opening of Elisir stayed on the tasting menu?
There are those signature dishes, like the branzino in the cigar box, that's always a winner. Sometimes the concept of a dish just works — the presentation, the quality, you hit a high note. And we've hit a few: the Italian sushi, the carpaccio, some of our pastas.

What's a new dish you're excited about?
We have a poached duck egg with tempura matake mushrooms, a port reduction, black truffles, crispy sage. We present it so the crisp matakes make a nest for the duck egg. There's great flavor.

What do you think of the restaurant's critical reception so far?
Well, it's funny, I have a book coming out, and there's a whole chapter about that. I contacted the major critics in town to talk about it, and they were all extremely open with me. Phyllis Richmond, Tom Sietsema, Todd Kliman. I was able to collect some information and better understand where they're coming from. But really, I don't discuss criticism. I accept it. It's one person's opinion, and it's altered by that person's state of mind, how they feel that day. I try to take the worst of it and find truth in it, and use that to my advantage. But I also would never change the way I cook to try to have a food critic like me better.

Let's hear more about this cookbook.
I hope it's going to get a lot of buzz, it'll come out sometime next year. It's half classic cookbook, using my personal interpretation of modern Italian cuisine. And the other half is my personal experiences. Part bio, part about my transition from Italy here, getting exposed to chefs like Michel Richard, Roberto Donna. I've taken a lot of culinary trips over the years, and when we chefs are on trips, we turn into something different — there are no rules. So I thought people would be interested to see behind those curtains, while still being respectful to the chefs involved.

What do you see as this year's highlights?
We were nominated for a Rammy for Best New Restaurant, and that was a great honor. I went to cook at the James Beard House for the ninth time. The next time, they're going to give me a pin. It's always nice to be there.

What do you see as your goals for the next year?
We're going to focus on getting established in the community, as we don't feel we're where we want to be on that. And we'll continue the process of trying to be one of the top restaurants in the city. If we can't do it, we'll cross that bridge when we come to it. But I think if we keep doing what we do consistently and well, someone's going to notice. Many people have noticed already, but every chef wants to be the best. It may take us ten years.

Any final takeaways from Year One?
I think there's a perception that we're a very, very high end restaurant. People assume we are a fine dining restaurant. But we have something for everyone. Another place might be a bistro, or a taqueria, and they might have higher prices than we do. I end up scratching my head — does that mean we should raise the price of our dishes? But that's the kind of thinking process that comes during the first year. I think unless something major happens, a restaurant forms its identity in the first year. So we're figuring out what we want to be, and we hope that people will associate that identity with us, and stick with us.