Welcome to Curbed Cuts, all the news about where you live from Curbed DC... 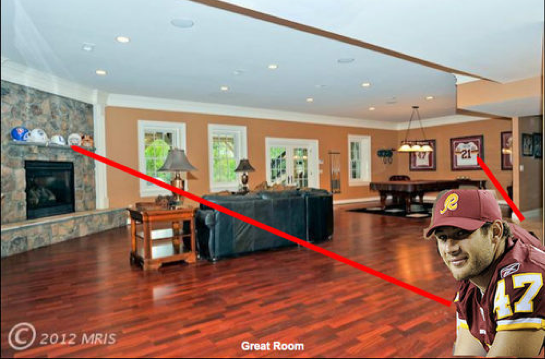 LEESBURG—Almost two weeks ago, when Chris Cooley was a former Redskin, he listed this mansion in Leesburg. Now that he's back with the team we're waiting for it to disappear. But in the meantime see where he displays his 'Skins jerseys and, ahem, helmets for other teams.

CONTROVERSIES—How about some allegations about discrimination for this Friday? The Latino Economic Development Center has outlined a number of ways residents of an apartment building have been treated unfairly or lied to and delivered a petition to Jair Lynch this past Monday.

GANGAM STYLE—Drop everything and watch this video of a Halloween light show on someone's entire house set to the thumping bass of Gangam Style. The house is in Leesburg, but the owners aren't giving up the address for fear of hordes showing up. Just do the dance in your cubicle instead.

MCLEAN—There's a house built to look exactly like the White House that has been trying to find a buyer for over a year now. It just came back on the market—now under $4M—and has all the interiors you would expect to find. Oval Office...check!

CRAIGSLIST—The Republican looking for a housemate who used proximity to Sen. John Kerry's house as a selling point has changed tactics (a social media tidal wave will do that). She's resorted to subliminal messages instead.

STARCHITECT WIRE—DC doesn't have too many architects that the rest of the world covets, until now. David Adjaye, maestro of the African American History and Culture Museum and Bellevue Library, has been named the most influential black person in Britain (where he grew up) on the PowerList 2013.

RACKED DC—New stores to know: Bonobos, Nikki Poulos, Buffalo Exchange, and more. We're also giving away TODAY ONLY one free blowout at Drybar. Click here for details (you must enter before midnight).

HORROR STORIES—We're still looking for tales from the trenches of renting in or near DC. Send 'em in to our tipline (dc@curbed.com) and we'll post them anonymously during our upcoming Renters Week. Then we all get to vote on them and the winner across all Curbed sites will win $2,500.

HOUSE PRICES—Prices are rising and everyone says it is because of tight inventory. That is part of the story. Our appraiser guru, Jonathan Miller, wrote a few paragraphs on the five reasons prices are going up.

U STREET—This week for Bar Crawl Living we looked at American Ice Company and homes within walking distance so you can live the car at home and drink up all night long.