Share All sharing options for: Harper McClure Talks About The Federalist's First Year 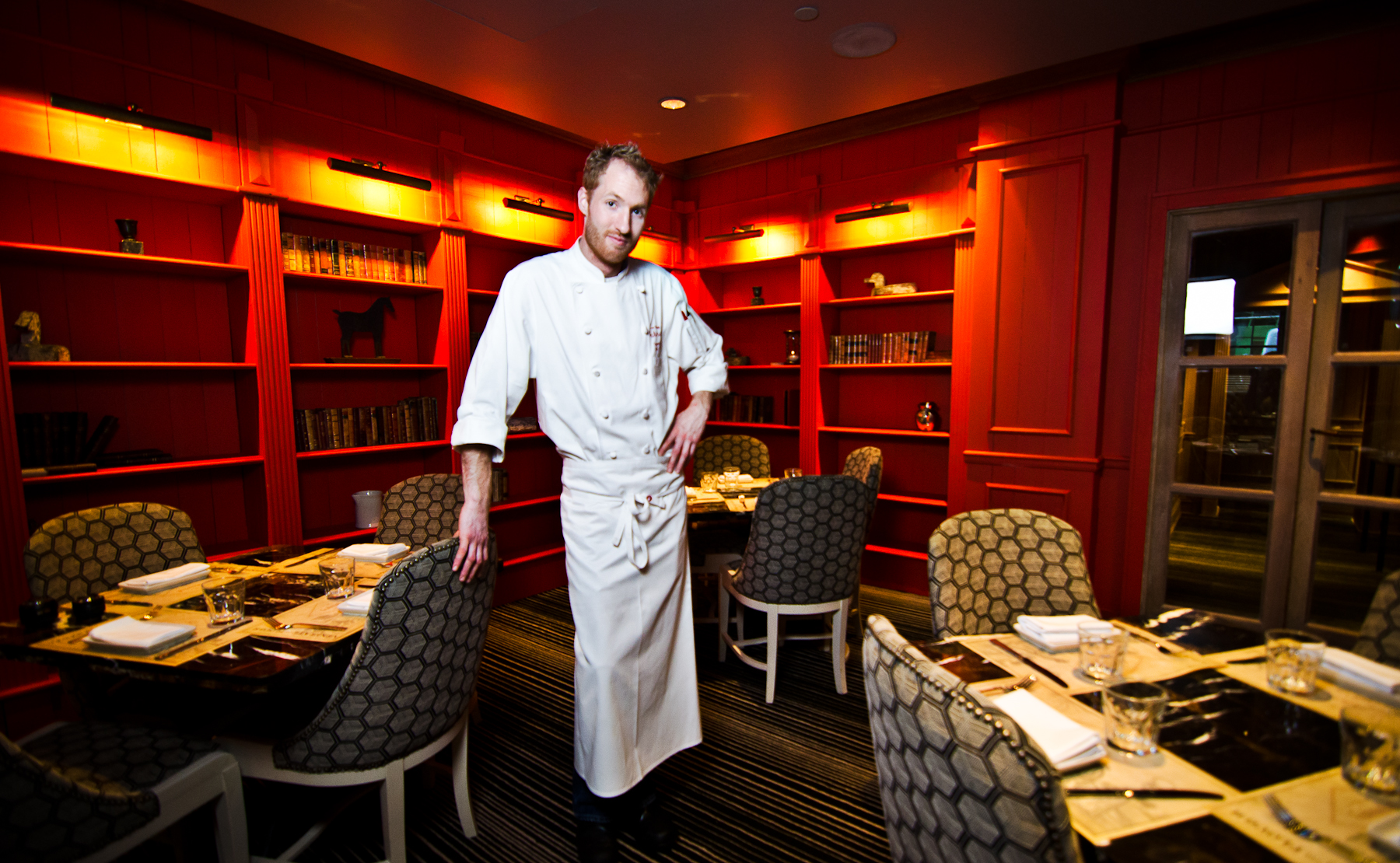 The Federalist debuted just over a year ago, after a multi-million dollar renovation at the historic Madison Hotel. It came with an ambitious mission — to be a restaurant inspired by the menus of the Colonial era, inspired by such Founding Fathers as the one the hotel is named after. Chef Harper McClure opened the restaurant last October. The veteran of such destinations as Vidalia and Marcel's talks about how The Federalist came back from a quiet start and a tough review, and how he learned to cook in a way that felt more natural.

Given this restaurant came after a long renovation process [of the Madison hotel], how soon did you get involved with the project?
The ownership [Jamestown Properties] took over in January of last year, and they had intentions of what they wanted to put in the space. Dominick Coyne — he designed the space, and I had actually worked at other properties he designed in Atlanta. I came into the process in July of last year, and there were about three and a half months of planning, and new menu development.

Was there any desire to keep what had been here previously [Palette] in mind when coming up with the concept?
Not really, that wasn't the goal. Actually, they wanted something pretty much the opposite of what was here before. This was something that would appeal much more to the locals, something that wasn't a standard, typical hotel restaurant.

The menu started off very colonial in style. Did you have any experience with this kind of cooking?
No, not at all. I've pretty much always been in fine dining restaurants, except my experience in a pizza shop when I was 16, 17 years old. But my externship was in a five star, five diamond restaurant, and I worked at Marcel's, at Vidalia.

Did you end up doing a lot of historical research yourself for the menu?
I did a lot of research. I looked at some of the earliest American cookbooks, and tried to see what people were eating in the colonial era. Honestly, it wasn't that much different from what we are eating now. A lot of heirloom vegetables, locally sourced meats.

Did the restaurant take off right away, or has growth been slow, or gradual?
I would say it's gradually grown. It was the ownership's idea to open quietly over a few month period, more of a grassroots movement. So the months of November, December and January were really quiet, and really reliant on hotel business. I would go out and do events, and no one had heard of the restaurant. That was very frustrating, and for the staff too. You're working so hard to get open and getting the menus up and ready, and for a small amount of covers. That can be really unfulfilling.
But things really turned around by Valentine's Day, by March. Things started to click a bit when we launched our spring menu. Rather than sticking to traditional colonial we set ourselves free and said, "We're just going to try to cook, and if people like it? Awesome." And the reception was so much better.

What prompted the change?
Well, we had been slammed by Tom Sietsema in our first few months. I don't like to talk about it, but it hurt. It hurt as a chef, and as a team. And we kind of took a step back and took a look at what we were trying to produce. I think we were trying to force it into something we weren't comfortable with. People don't want a history lesson, they just want to eat dinner. And the results were so much better.

Give me an example of what was on the menu then, and how it's different from what's on the menu now.
Well, before we had a veal meat pie, a trout almondine. It was almost a combination of colonial food and nouveau cuisine from the 60s, it never really jelled. Now, we have a mallard duck breast with Swiss chard, roasted figs, macadamia nuts. It's a very simple preparation, where you pan roast the duck, and the figs taste exactly how figs should taste. It's very bright, very fresh.

How much business are you seeing now, say, between the bar and the restaurant?
Again, it was the ownership's idea to want this to be a dining destination. The bar is intentionally small. The bar on the other side means there are two distinctly themed bars. This bar was supposed to be more for while you're waiting for a table. That's kind of changed, where we're drawing an after work crowd, an after hours crowd. There's a big push around 9:30 or 10 of locals coming by after dinner on their way home. So the cocktail list has grown quite a bit, and I've worked so that the appetizers and small plates are reflective of sharing, $10-11 each.

What about lunch versus dinner?
Lunch is where we can grow quite a bit. Not that we can't grow during dinner — don't get me wrong; I always want to see more business. But lunch customers are a very loyal crowd. They go to places they know they can get in and out of in 30, 45 minutes. We've tried to tap into that market with our Boardroom lunch deal, where you can get several courses all at the same time. That's been a pretty big success. The lunch menu generally is very different. More salads, sandwiches and burgers.

What's the lunch crowd like? Mostly the business crowd?
Yeah, it's mostly office people. We have the Washington Post, the National Association of Home Builders, and a few law firms around here. You know, the people that are fairly well-to-do and can drop $30 or $40 per person on lunch.

I guess this neighborhood can be kind of tough in some ways.
It's a weird neighborhood. It's sometimes easy to feel lost in the mix, in-between the West Side, and Logan Circle. We're not quite close enough to the White House for people to walk over.

With inauguration coming up, do you think given your theme it's going to be very busy?
Yeah, absolutely. I can't wait to sleep on these banquettes for three days in a row. Actually, I live pretty close, so I may not have a problem getting to and from here. Let's hope that's the case. But the hotel's going to be booked solid. Thank god I don't have anything to do with the banquet facilities and can focus on the restaurant. But I expect it's going to be a great weekend. January and February aren't normally the busy months. And then we'll head into Valentine's Day.

What else has changed for the Federalist over the past year?
Well, there was the focus more on small plates at the bar. The menu is changing a lot more rapidly. This is my first hotel job, and it's a fair amount of work to launch a new menu here. A lot of people have to sign off on things, there's a lot of paperwork. We've started having a lot more specials. We don't have a printed tasting menu, but I'll come out and talk to some tables and cook six, seven, eight course meals for them. That's what I've always done in fine dining restaurants.

How has the mix of hotel vs local guests changed?
We've done a fairly good job in attracting the local crowd. We're starting to see people make the tr[p down from the P Street area. We have a fair amount of regulars. I'd put it at 70 percent locals, 30 percent hotel guests. And considering last year that was reversed, I'm happy with that. I've been getting out and doing a lot of events to get our name out there. I'm headed to a March of Dimes event after this.

What dishes are you particularly excited about on the menu right now?
There's what you'd call our signature dish on the menu. It's still there from the beginning and still our top seller, the Chesapeake rockfish. I also really excited about the butter poached Maine lobster with vanilla parsnip puree, wilted spinach. The cocoa rubbed venison with barley risotto. That's sold surprisingly well. You sometimes have to cater to the steak and potatoes crowd, and we have some great steaks on the menu.

What are your goals for 2013?
I don't want to stay stagnant. I think we may implement a five course tasting menu. I want to increase our happy hour business. When we reopen the patio in the spring, I'm going to push that patio big time. And continue with our Sunday Suppers - oh, I haven't even told you about the Sunday Suppers. That's really exciting for us. We partnered with Bev Eggleston - he and I go back to too many late nights drinking. But he gets great pig. We use this communal butcher block table. The last time I had two 45 pound porchettas. It's $35 per person and we have had good results the few times we've done it. We open an hour earlier since no one wants to be out late on a Sunday night.

Any other takeaways from year one?
Learning how to manage my staff. This is my first chef de cuisine job, so it's a big growth area for me. When you're an executive sous chef, you think, "Oh, this guy doesn't do anything" and then you get into it and it's like, "Shit!" You never realize how much extra work there is. So many things stress you out. But I'd never take it back.