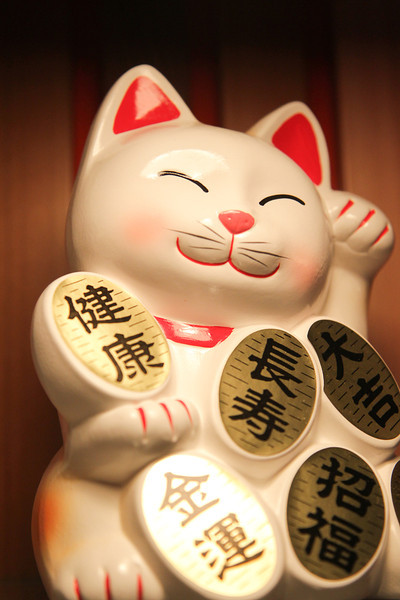 Have you seen this cat (or one like it)? The Maneki-neko, or "lucky cat", figures prominently in Japanese culture, so it was a likely decorating choice for Union Station sushi restaurant Yo! Sushi. Unfortunately, as general manager Thomas Hanson tells Eater, the collection is dwindling. Now, only four remain.

"The neko (cats) are known as the good luck cats due to their waving arms, mimicking the motion of a cat cleaning its face. The particular cat taken from our restaurant was hand crafted and meant to sit in a window. As the temperature of the cat increases, its tail starts to go back and forth. It's actually very cool and we have had numerous guests ask where we got them.

Unfortunately they are imported from Japan and are around $60 USD each. We have a second one that had its tail broken off by a guest so now that one's unusable too. Normally we would have them going along on the conveyor belt in between plates but that has since stopped.