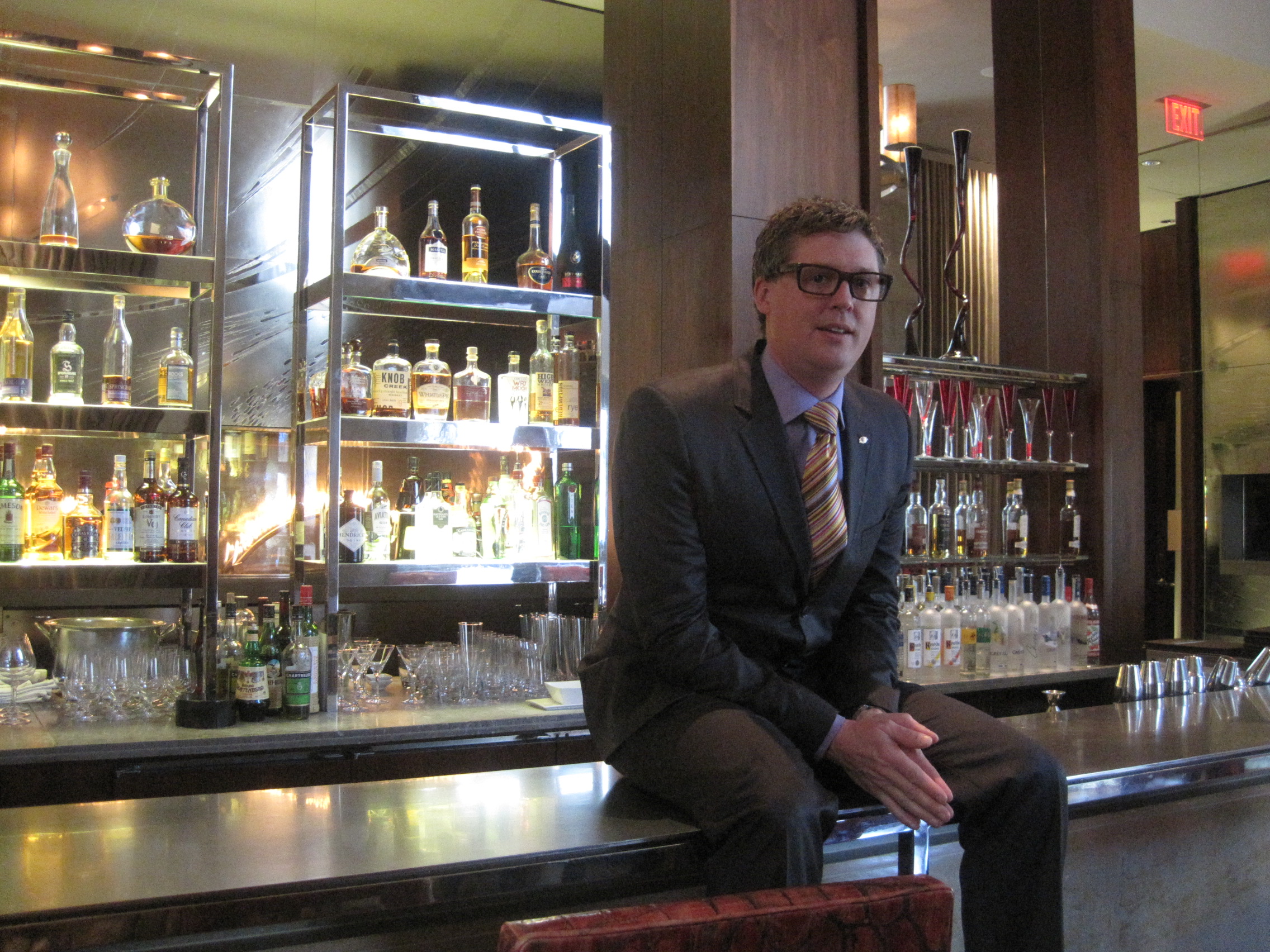 CityZen, which opened in the Mandarin Oriental hotel in 2004, has been a destination restaurant since its debut, and the buzz hasn't died down. The restaurant just made Tom Sietsema's 2012 dining guide, earning the coveted four stars rating. Diners have to book two months in advance to experience chef Eric Ziebold's multi-course tasting menu. General manager Jarad Slipp shares what his experience is like behind the host desk, juggling couples getting engaged with crazy bodyguards. Hear about his experience with a persistent clown, a man allergic to everything and why CityZen's "normal" employees aren't really normal for the restaurant world.

Do people ever just show up on a random Saturday, demanding a table?
Rarely. I think because the location isn't downtown, you don't get a lot of people thinking, "Let's go here." A couple people in the hotel might come down. So there might be guests checking in who are wondering, "Why can't we get a table here?" But we made a conscious decision not to give preferential treatments to guests. It's first come, first served.

So can there ever be an exception to that?
There's always the possibility of a last minute cancellation. We don't let people leave messages, so it's whoever calls first. That way if they leave a message, they can't be upset if...four hours later, it is filled.

So do you just end up sending hotel guests to Sou'Wester?
Sou'Wester is really more the amenity to the hotel. We explain that, and say that we can't give preferential treatment to hotel guests. Now, if a guest is standing in front of me, and the phone rings and there's a cancellation, that's another story.

Are there a lot of cancellations?
We had a ton [last Tuesday, with the hurricane] for obvious reasons, and that's fine. But we take a credit card, and require 24 hours notice and we're pretty vigilant about that. I understand things happen — if your wife goes into labor, I'm not going to charge you — but if you just don't show up, yes, I'm going to charge you $400. I liken it to the airline industry. If the flight leaves, and you're not on it, you're still paying for the ticket, because they could have sold that seat.

Do you have a favorite table?
Do I? Absolutely. But I definitely believe that one man's trash is another man's treasure. We also build the dining room out to specifically cater to that night. We're fortunate that we're in the hotel, so if I need to store a bunch of tables in the basement that night, I can. But we can switch four tops to two tops, or square tables to round tables - so the table you liked last time might not be there the next night. It's nice to be be able to do creative things. I also have a file where I store a guest's favorite table numbers.
A lot of people like #49, it's the last one on the banquette, where you have a good view of the kitchen. I like #33. You're smack right in the center of things, you can see and be seen. I put a lot of engagements at #52, by the wine library, which is back against the wall, where you can look out into the kitchen and the dining area but they can't see you as well.

You see a lot of engagements?
We do. Probably?15-20 a year? I've never seen one go awry. Well, never here anyway.

How long have you been here?
About four and a half years.

During that time, has the demand for tables always been about the same, needing reservations 2 months in advance?
It's been fairly consistent. On Fridays and Saturdays, we're nearly always booked. Sometimes weekdays have been slower. Because we're open only five days a week, we have the same full team on a Tuesday as we do on a Saturday. So that means if a team member wants a Saturday night off for a concert, don't even ask - it's not going to happen. But we'll take a week and a half in January and all be off together, and we're off for two and a half weeks between August and September, since those are the leaner times. But after the summer vacation ends, it's rock and roll time; we're jam packed.

Do people ever offer you money to try to get a table?
Occasionally it happens, but it doesn't really work. If we're full, we're full. We get all walks of life here, whether it's someone for whom dinner at CityZen just means it's Tuesday, or a couple who's been saving up for months to celebrate their 50th anniversary with us. If someone calls up and says, "My name is Brad Pitt, my name is President Obama", If we're booked we're booked. I'm not going to bump somebody.
Now, last Saturday, a group of four game in without a reservation. They're getting loud with the hostess, who doesn't have a reservation. I come over, and I try to disseminate the facts. Well, turns out they didn't make the reservation - their secretary did, and of course there are two restaurants in the hotel, and she made it for the other one. So I told them to go have a drink, we'll work them in at some point. They were still a little huffy, but they had their drink, and I took them over to their table. Now, upon exiting — yes, there was a handshake. But I'm not against taking a gratuity after the fact, and that's what it is, a gratuity, just like our staff gets. But no one can offer money beforehand - that's a bribe, and we don't take bribes, and that goes for everyone on my staff.

Do you see a lot of VIPS?
If you're a celebrity, you're probably going to the Four Seasons. If you're a captain of industry who wants to be under the radar, you'd come here. It's funny when the celebrities come in, though - they want to pick out their table, oversee everything. I've said, "I don't want to make you feel bad, but I'd be shocked if anyone recognized you here." Now, that said, we had a multi-multi-billionaire come in here once, and of course there's a reporter in here at the same time, and he asks, "Is that so-and so?" And our waiters do not confirm anything, but of course he's on his Blackberry and it ends up on WashingtonPost.com in an hour.

Can you talk about the celebrities who come after the fact?
I prefer not to. I think if you live that kind of life, then you prefer to be anonymous when you dine.

Do you have to do a lot of extra security measures if someone political comes?
Oh yes, all the time. We often don't know, depending on the level of their stature, right away. We might know a couple days in advance, we might know an hour in advance. But you'll get where, like, 50 mossad are posted all over the restaurant. I'd like to give some lectures on etiquette to the secret service. Not ours - ours are really good.

What's the weirdest special request that you haven't been able to fulfill? We had a table of four a couple of years ago who were throwing a surprise party for their friend and asked, "Is it ok to have a clown?" No. No. Up to this moment in time, I never had to have an arduous No Clown Policy.

So?was it an issue?
They were ok with it. I said they could have the clown go to the lobby if they wanted.

So, besides um, clowns, what sort of things should they clear with the restaurant ahead of time? Obviously, food allergies.
Right. We also try to think ahead ourselves. We don't get a ton of children at CityZen, but we went out and bought a couple iPads, which are also great for single diners. Instead of reading a newspaper, they can read 700 newspapers, and there are 50 games for kids to entertain themselves. Sometimes with engagements, they'll want to drop the ring off early, and have me hold it. The more we know in advance, the better.
We take copious notes on our guests. What tables they like, what tables they don't. What dishes they like, what dishes they don't. It's built up over time, so if you haven't dined here before, it's more important to let us know in advance. Right now there are so many allergies. If you're gluten-free, we can react to it with more time, so we present a seamless experience where you don't feel like you're missing out. We're one of the few places in the city that offers a vegetarian tasting menu every single night, so we have a huge amount of vegetarians and a huge amount of vegans. It really speaks well to Eric [Ziebold]'s talents that he really embraces that as a challenge.
We had a woman who made a reservation here who sent me a two page, single-spaced list of all the things her husband couldn't eat. He couldn't eat anything with bacteria, so I would guess he had a compromised immune system. And if you think about it, that means no citrus, because the rind of the fruit has mld, no milk. We did a menu with two weeks noticed, faxed it back to her. The whole family got the same menu, but they had no idea that we had taken so many considerations. The wife just burst into tears afterwards. It had been the first time he had gone out to eat in 12 years. That's super cool.

Do you get a lot of people doing the bar menu as opposed to the tasting menu?
The bar is kind of bizarre. It's a $50 menu, which I don't think is cheap, but I think it's one of the best values in the city. But one night we'll have a handful of people, and one night we'll be absolutely annihilated. And it won't have anything to do with hotel occupancy, or the weather, or whether Arena Stage has a play going on.

Do you have any tools you rely on as a Gatekeeper, like Open Table?
We do use Open Table. We've looked at the other ones. We really push Open Table because we do so much with data collection. We've maxed out the profiles on some regulars, where I have sub files on my computer. I have every menu of every regular who has ever dined with us.

Where do you eat when you're not at CityZen?
I've been cooking at home a lot. I've probably been to Palena 70 plus times. CityZen isn't like a normal restaurant, which means we're actually normal. 80 percent of us are married, 80 percent own homes; we don't have any drug addicts, and the only person sleeping with someone on staff is because they've been married for years. So there aren't a lot of late nights out. I kind of miss it. When I was in New York, the whole team would always go across the street. If there's something special going on, we might end up at Old Ebbitt.