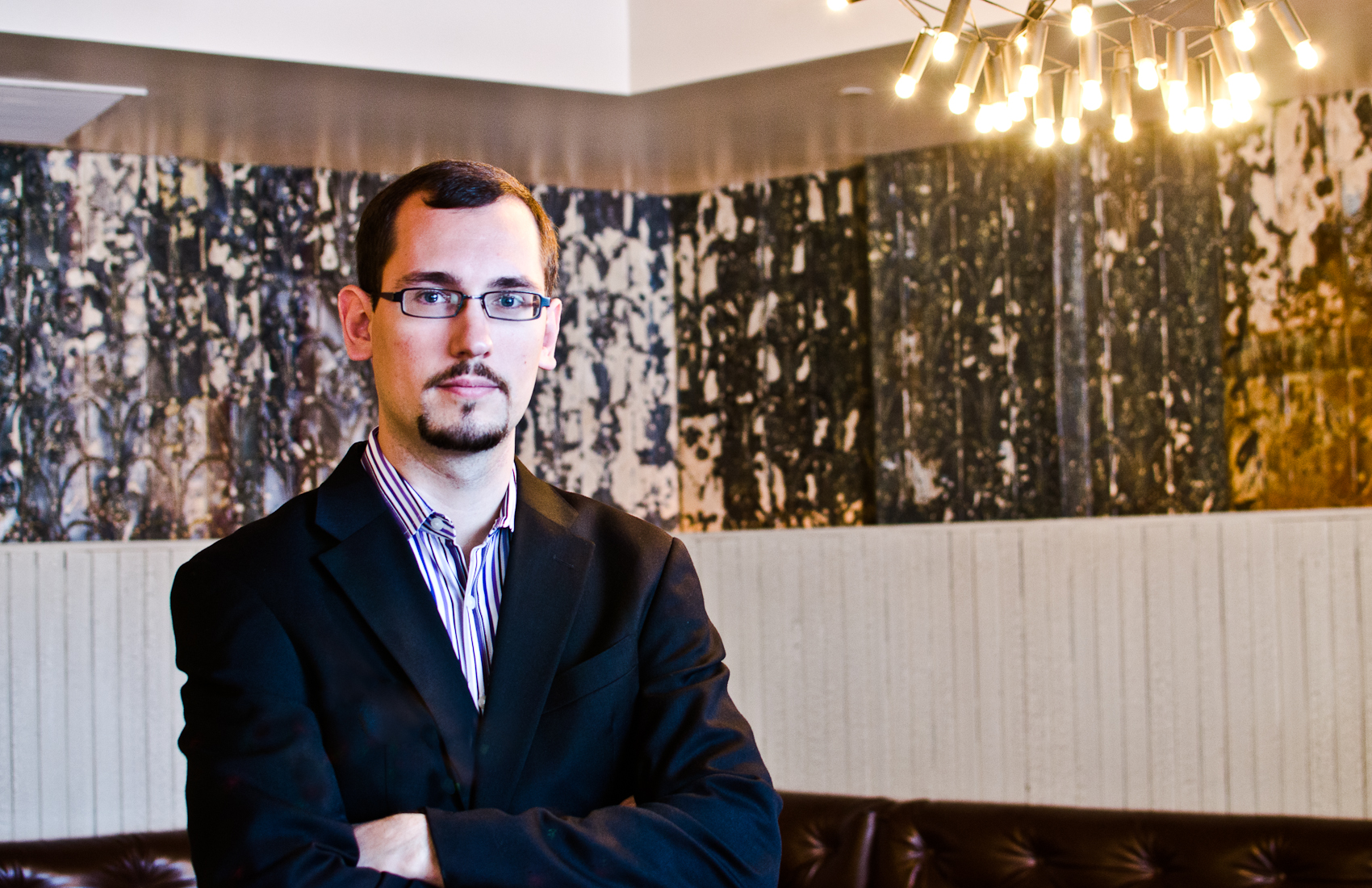 [Photo: R. Lopez]
Since opening back in January, Mintwood Place has soared from neighborhood favorite to full-fledged hot spot (it even snagged Eater's award for So Hot Right Now). The restaurant has built a reputation for solid and creative French-inspired food, under the direction of Central vet Cedric Maupillier. But what is it like to get a table? General manager Neill Blackwood talks about the restaurant's quick rise to success, the hassle of dealing with a high-end restaurant in parking-starved Adams Morgan, and the fact that no, he doesn't care what politician you know — there are only so many tables.

It's Saturday night at prime time. What kind of wait should I be expecting for a table?
Typically the wait in the dining room is about an hour, an hour and a half. Depending on the evening, though, we may have room at the bar. The high-top [tables] are a good tool that we can use to be flexible and allow people to scoot in there.

How big of a restaurant is it, exactly?
We have 80 seats in the dining room, and 30 in the bar area.

How far in advance should you call for a reservation? Do you only take reservations for a certain time out?
It depends on party size. I'd say at least a week ahead of time, or a week and a half for prime time seating. As far as way in advance, that's fine — if you want to book something two years out, we can say yes.

How much of your seating is reservations versus walk-ins?
We do about 70 percent reservations. It's the opposite for brunch, where there is only a small amount of reservations available, and the rest are walk-ins. For the most part, people wait about a half hour for brunch, unless a bunch of people walk in at once. We're busier on Sundays.

Do you see a lot of cancellations?
It's really surprising. Some days there will be no cancellations. Sometimes you'll have 35 seats cancel out of 80 in one night. I think when people plan more than a week in advance, things creep up on them.

Were you slammed at the onset, or was it more of a steady growth?
We've definitely grown. We were relatively busy at the beginning, but even more so once we got more comfortable in our own skin.

How are weeknights?
Definitely slower, though you'll see some Tuesdays and Wednesdays that are as busy as Fridays or Saturdays. A lot of regulars and neighborhood people come in on Tuesdays and Thursdays.

Do a lot of people request a certain table?
There are definitely people who want a certain table. The booths are always requested, and the window seats. Every once in awhile someone will be like "Ok, I'm sitting in that seat, and you're not going to do anything about that."

What's your favorite table?
Probably table 3 in the corner; you can look out on the restaurant and see what's happening. I also love sitting at the bar area. In the restaurant, at just about every table you can see part of the kitchen. I'd say the biggest request we get, really, is for a quiet table.

Is the noise an issue?
It does get loud. We've done things to counteract that, like acoustic panels on the tables...things that don't detract from the look of the restaurant.

Is your background mostly fine dining?
I've worked in a mix. I started off in fine dining, and from there it kind of evolved into this. Here what we try to portray is a neighborhood restaurant in an upscale-casual setting. I was at Rogue 24, and before that Salt & Pepper, Mokomandy in Sterling, Trummer's on Main.

What's a challenge for you?
We get multiple requests every day for 8 person, 12-person tables or larger. We don't have a separate room, so it's hard to make room for those. At the beginning we took all of those requests, but we later figured out that up to 8 people is what we can take care of comfortably. Once we get above that number, things deteriorate fast. People always want to try to add a seat here or there. As much as possible we've tried to be resolute about it.

Has anyone ever bribed you for a seat?
I haven't gotten any bribes. People for the most part try to use titles. "I know so and so" and make that kind of powerplay. "I know the owner, the mayor, this Congressman, whoever."

Does it work?
If we have a table, we give them a table. And we have alternatives such as our standby list. But it's more or less first come, first serve. We're not going to take any tables away from others for a VIP.

How do you the neighbors feel about the restaurant becoming so popular?
I think there's a mixed reaction. For the most part, it's very positive. Other people are bothered by it. But we have a great rapport with places like Cashion's, and of course Perry's, and we try to send people elsewhere if we're booked. The biggest issue for all of us is parking.

Is that a major problem? It doesn't surprise me.
It totally affect us. It's a huge issue. We think it has a big effect on no shows and cancellations.There's little parking lot on 18th street, but usually if someone makes a reservation, we let them know there isn't a lot of street parking. We tell them to try to cab or metro. And we run into a lot of scenarios where one person arrives, and says, "My husband is parking," and that will take 20 minutes.

Are you ok with that?
Yes, we do seat people once the table is ready. At first we would send them to the bar, but we realized we don't have a whole lot of space there or in the front of the restaurant.

Have you seen a lot of VIPS in the restaurant?
I don't like to reveal them, but some things have been in the news. The Obamas came here.

Did you have a lot of notice?
We got the official notice three days in advance. We were told they were planning a fundraiser about three weeks out.

Did you see an Obama-related boost in business after?
No, but we've always kind of been busy. It's more that people want to sit at that table, which doesn't exist anymore because we put together multiple tables.

Are your regulars mostly people who live near the restaurant?
If they come here a lot, it's probably for one of two reasons. One: they live in the neighborhood. And the other because of the staff and Cedric. He of course has a lot of regulars who know him from Central and Citronelle. But there are also people on our staff that have followers. Our bartender Brenton Davis has a lot of followers. Other staffers, too.

Have you gotten any odd requests for regulars?
Not really. We've done tasting menus with wine pairings for some regulars.

Are there any dishes that everyone orders? I'm thinking the hush puppies.
The escargot hush puppies are ordered a lot. The tagliatelle bolognese is a big seller.

Do you rely on any tools to do your job?
We use City Eats for reservations. It has really worked well for us.

Where do you eat off the clock?
I love Toki Underground. I love Proof for cheese, charcuterie and small plates. I'm excited about Suna.