Peregrine Espresso Informs Yelp That No, It Isn't Closed (Updated)

Share All sharing options for: Peregrine Espresso Informs Yelp That No, It Isn't Closed (Updated)

What to do when Yelp incorrectly lists your restaurant as closed? Fight back on Twitter. Peregrine's DC Twitter account (@peregrinedc) was compelled to send the message above after the restaurant's Yelp page wrongly reflected that the coffee shop had closed. Currently, Peregrine has a 4 star rating on Yelp with more than 50 reviews. Here's a screenshot of the Yelp page, which should theoretically be amended soon. 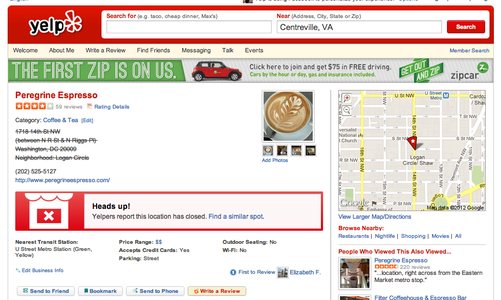 Update: Peregrine employee Ryan Jensen said they heard about the listing from a confused customer, who called the restaurant to see if it had closed. "I've read about instances on Yelp and Google Maps where open businesses turn up as closed online but this is the first time it has happened to us," he said via email. "In some of these cases, a competitor was behind the 'closing' but I can't imagine that being the case here because we are friends with our competitors."