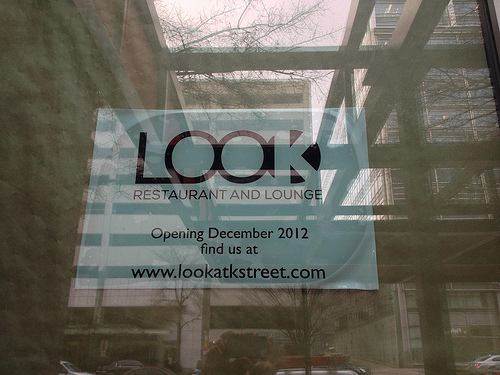 1) K Street: Might we see Look, the new Icelandic-themed restaurant from the Teatro Goldoni team in the restaurant's former location, by the end of the year? The restaurant may open in December, if this sign can be believed. [PLYWOOD]

2) Arlington: It appears that a restaurant called Enjera will replace the now-shuttered Tagolio Pizzeria and Enoteca at 549 23rd Street S., according to ARLNOW. A restaurant with the same name was in the space some time ago, but it is unclear whether this new one has the same owners as the former Ethiopian spot. [PLYWOOD]

4) U Street: Smucker Farms is hoping to sell beer and wine at its 14th Street location. PoPVille spies a liquor license application for the market. [POST-PLYWOOD]

5) DC: Looks like the True Food Kitchen team is still interested in the DC market, according to WTOP. The healthy restaurant preaches an anti-inflammatory diet and is co-founded by Andrew Weil, director of the Arizona Center for Integrative Medicine. WBJ had a similar story back in March, though, so time will tell when a lease will be signed. [PRE-PLYWOOD]

6) Dupont Circle: Edgar Bar & Kitchen has a new opening date. According to a rep, the new restaurant slated for the Mayflower hotel will open its doors Dec. 21. [POST-PLYWOOD]