Share All sharing options for: Restaurant Experts Name the Top Standbys of 2012

As is the tradition at Eater, our closeout of the year is a survey of friends, industry types, bloggers, and readers. This year, we asked the group eight questions, from Meal of the Year to Top Newcomers. All will be answered by the time we turn off the lights at the end of the week. Here, we ask folks, "What Were Your Top Restaurant Standbys of 2012?" They let us know the places they keep coming back to, time and time again. Responses are related in no particular order; all are cut and pasted herein. 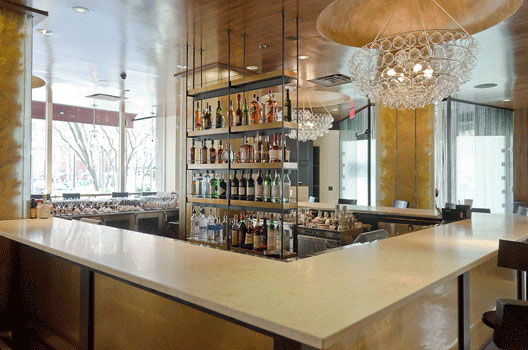 Nycci Nellis, founder, TheListAreYouOnIt: It wasn't that hard to find me in 2012. I was regularly dining (and/or imbibing) at a handful of spots around DC. Lunches, brunches, cocktails and dinners were had (and had and had) at The Source, Bibiana, Birch & Barley, Mintwood, Proof,  Pearl Dive, Woodberry Kitchen, Bourbon Steak and Graffiato  ... oh and Rasika ... both of 'em.

Tom Sietsema, Food Critic, The Washington Post: In pursuit of what's new, I rarely have time to return to restaurants for sheer pleasure. But I made exceptions for Little Serow, Vidalia, Jaleo and the Oval Room. I love the racy Thai flavors, sophisticated southern cooking, spirited Spanish tapas and chef Tony Conte's always-fascinating juxtaposition of flavors, respectively.

Jenny Rogers, former Yeas and Nays columnist and City Paper editor: I always end up eating a few patty melts at the Tune Inn every month. And I go to Georgia Brown's for the salads any time I take someone out to a fancy lunch.

Michael Martinez, producer, the Kojo Nnamdi Show: My parents live in Barnaby Woods, and I'm a big fan of cruising through the Broad Branch Market any time I go see my folks. It's a little off the beaten path for people who live closer to the core of the city, but their sandwiches are worth the trip. I'll put their "Industrial" up against any other sandwich in the city.

My co-workers at the Kojo show have known for quite a while that I have a cookie problem. The Salty Oat cookies at Teaism will always bring me back for more. I usually hit up the Dupont Circle location on R St.

Michael Birchenall, editor and founder, Food Service Monthly: Fiola. Tthe recurring theme for me in 2012 is dining/imbibing at the bar, out and about alone. There is no better deal than lunch at the Fiola bar with a glass of Prosecco.

District Commons: It's a quick stop on the way to the Metro, a nice bar with
American spirits and simple noshes.

The BBQ Joint, Easton: I travel for work to Ocean City maybe six times a
year, that means always a right turn off Rt. 50 onto Dover St. to go to Andrew
Evans' BBQ Joint.

Jessica Voelker, Online Editor, Washingtonian: Ripple (it's in my neighborhood)
Vidalia (happy hour)
Boqueria
It took me forever to get to Toki Underground but I will be returning often in 2013.
Nostos: Almost worth doing battle with Tysons traffic for the Greek salad and the cold appetizer sampler.
Pret a Manger (sad face)

Stefanie Gans, food critic, Northern Virginia Magazine:I admire Lyon Hall because it doesn't have to make good food. It's a total scene there, but instead of being Lauriol Plaza, it's more like the snazzier little sister of Et Voila. I love sitting at its crowded bar. I also adore Maple Ave in Vienna, the tiny shack sends out really good, inventive food. Unfortunately, this gig doesn't allow me to be a regular anywhere, but those two are places where I enjoy eating and just being.

Erin Hartigan, Senior National Editor, CityEats: Little Serow – I'd wait all night for that punishingly spicy Thai journey. I also can't walk by Standard without heading inside the gates for a burger. The winter closure is like a period of hunger-mourning for me. I love the bar of Graffiato at lunch, particularly in the summer when corn agnolotti's on the menu.