Share All sharing options for: Restaurant Experts Discuss Their Best Meal of 2012

As is the tradition at Eater, our closeout of the year is a survey of friends, industry types, bloggers, and readers. This year, we asked the group eight questions; all will be answered by the time we turn off the lights at the end of the week. We've already heard about everyone's Restaurant Standbys and more. Now, here's another one: What Was Your Single Best Meal in 2012? Responses are related in no particular order; all are cut and pasted herein. 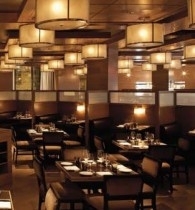 Jessica Voelker, Online Editor, Washingtonian: It's hard not to say Komi, but I had one perfect meal at Marcel's, too.

Missy Frederick, editor, Eater DC: Locally, a dinner with my husband, sister and brother-in-law at Rasika West End. Perfect food (goat biryani is the best), excellent service and wonderful company. Abroad, probably eating a giant lamb and haloumi sandwich with Pimm's cup on the steps near Borough Market in London with one of my closest friends, her boyfriend and my husband.

Jamie Liu, AskMen writer and Eater contributor: Locally, Restaurant Eve. I can't forget the apricot freshly picked from one of their trees topped with almond milk granita. Overall, the grilled chorizo sandwich at Brindisa in London's Borough Market on their crisp-edged ciabatta. It's always been my favorite London meal, and I went back the next day for another.

Michael Martinez, producer, the Kojo Nnamdi Show: I was lucky enough to celebrate my mother's birthday at Obelisk this past May, and I was happy to learn that it's every bit as good as advertised. It's a restaurant that does everything the right way, from the first course to the last. The pork chop was on the menu the night we were there – just one of the many, many highlights of a truly epic meal.

Michael Birchenall, editor and founder, Food Service Monthly: March 2, 2012 at the BBQ Joint in Easton Md. I was on my way to the Ocean City Hotel Motel Restaurant Association Spring Trade Expo and I had been
talking to Andrew about his expansion plans ? I stopped in for lunch and he prepared the Barbecue Tasting Sampler for me (pulled pork, sliced brisket, chicken, spareribs, cole slaw, corn bread, collard greens ? I also tasted his new item of smoked sausages ? I've told Andrew that I can't write about his barbecue as I quickly dissolve into a gushing food groupie ?

Eun Yang, NBC4: My birthday dinner at Fiola was wonderful!

Jennifer Nycz Conner, The Back Page, WBJ: Probably one of the many at Dogfish Head (I plead small children.)

Tim Carman, food writer, The Washington Post: That's always a hard question, since we tend to remember our most recent meals best. But I'd have to say my favorite was the dinner served by chef Nate Garyantes and his team at Ardeo + Bardeo. We ordered, among other things, the chicken soup with hominy and green chili broth; the Scottish salmon chop with herbed honeycrisp apple and fennel salad; and the black spaghetti with calamari, braised artichokes and eggplant-black garlic puree.  I loved the chef's flavor combinations. I appreciated the kitchen's attention to detail and its execution of each element on the plate. It was one of the few meals that I can say that I loved everything.

Jessica Sidman, Young & Hungry Columnist: Do I have to pick one? Sushi and udon at Sushi Taro. Veal tartare, smoke branzino carpaccio in a cigar box, and beautifully-made pastas at Elisir  I also went to fantastic pop-up dinner by chef Aaron Silverman, who's opening Rose's Luxury in Eastern Market next year. The crowd was great, the wine was flowing, and the food was inventive and delicious. My favorite dish consisted of lychee, ground pork, coconut powder, garlic chips, peanuts, cilantro, and red onion.

Stefanie Gans, food critic, Northern Virginia Magazine: My breakfast of ga'at, a traditional Eritrean porridge from Café Aurora in Alexandria (near Landmark). It arrives in a circular mold with melted berbere butter filling the middle of the well and a yogurt-sour cream mixture on the side. It was like nothing I've ever tasted before, but reminded me of pancake batter and matzah balls. I'm also reeling for another bite of the battered and fried burger at the Columbia Pike Eamonn's.

Mary Kong-DeVito, Girl Meets Food: Et Voila.  Their mussels are out of this world, especially when coated in a sea urchin cream sauce.  That dish haunts me in a Wuthering Heights kind of way.

Erin Hartigan, Senior National Editor, CityEats: No matter how many times I visit Rasika, chef Vikram Sunderam manages to surpass my expectations with textures, flavors, spice combinations and whimsy that are always fresh and daring. The most memorable visit was on a rainy night in September, when I'd just dragged myself home from a work trip. Spicy cauliflower has uncanny powers of rejuvenation.

Nycci Nellis, founder, TheListAreYouOnIt: 2012 had me in NYC a few times this year and I was very fortunate to dine at The Nomad in the super-funky Nomad Hotel several times. Get the chicken. Seriously. The Chicken for Two is now one my top-five favorite restaurant dishes. Order it. Eat it. You can thank me later.