As is the tradition at Eater, our closeout of the year is a survey of friends, industry types, bloggers, and readers. This year, we asked the group eight questions; all will be answered by the time we turn off the lights at the end of the week. We've already heard about everyone's Favorite Newcomers and more. Now, we ask, What Was the Best Dining Neighborhood of 2012?. Responses are related in no particular order; all are cut and pasted herein. 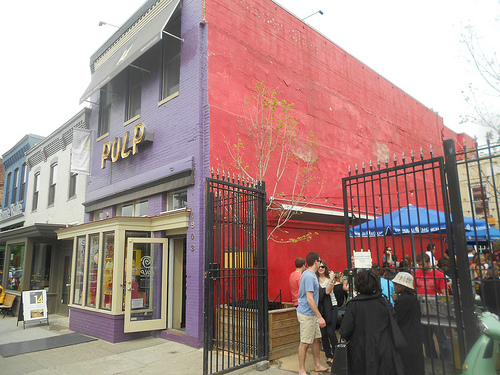 Tim Carman, food writer, The Washington Post: For true "dining," my money is on the neighborhood that's an intersection of Downtown/Penn Quarter, where some of the city's best chefs do their work: Scott Drewno at The Source, Fabio Trabocchi at Fiola, Vikram Sunderam at Rasika, Jose Andres/Paul Yeck at Jaleo, Haidar Karoum at Proof, Michel Richard at Central. It's hard to top those talents anywhere else.

Jessica Sidman, Young & Hungry Columnist: The 14th Street corridor. And it's only going to get better.

Jessica Voelker, Online Editor, Washingtonian: 14th Street. Who knew you could pack so many restaurants onto one little street? It's almost becoming obscene. I'm really excited about Capitol Hill though. It may be a few years off, but I think we'll see a restaurant renaissance out that way.

Missy Frederick, editor, Eater DC: 14th Street and Penn Quarter still set the standard. But I was excited about activity in Adams Morgan, Shaw and the West End.

Jamie Liu, AskMen writer and Eater contributor: Adams Morgan has really upped its game. Mintwood Place, Sakuramen, Doener Bistro joined Himalayan Heritage, and Cashion's as some of the great places to grab a bite in the neighborhood.

Michael Martinez, producer, the Kojo Nnamdi Show: I'll waffle on this one and say Dupont Circle, using the broadest definition possible. It's got everything from the super-reliable (And yes, I think Zorba's Cafe still serves up some of the most reliably tasty and affordable meals in Washington) to the super-hyped (I know people in other countries who won't stop asking if I've eaten at Little Serow yet – I haven't).

Michael Birchenall, editor and founder, Food Service Monthly: I live in Bowie ? I'll leave that to the Washington residents.

Stefanie Gans, food critic, Northern Virginia Magazine: I'm expanding the question to VA, obviously, and I'm going to call out King Street, which is obvious as well, but maybe not to those who don't venture outside of DC. On just one street: Restaurant Eve (technically around the corner), Vermilion (eat there fast before the chef leaves for DC), Brabo (really enjoyed the tasting menu), The Majestic, Eamonn's, Hank's Oyster Bar (weekday omelet available!), Pines of Florence (guilty indulgence of fettuccine Alfredo) – and at times, The Light Horse (serious dinner on ground floor, fun bar upstairs). I'm excited for Notting Hill.

Nycci Nellis, founder, TheListAreYouOnIt: 14th Street continues it's reign as the Area's most popular dining neighborhood. And, that isn't going to change anytime soon. The number of new restaurants slated to open on 14th Street in 2013 is jaw-dropping and hopefully, tasty.

Tom Sietsema, Food Critic, The Washington Post: Dupont Circle, if only because of the arrival of Little Serow. But the West End is close behind, thanks to a chef change at Westend Bistro and the debut of Rasika West End.