As is the tradition at Eater, our closeout of the year is a survey of friends, industry types, bloggers, and readers. This year, we asked the group eight questions; all will be answered by the time we turn off the lights at the end of the week. We've already heard about everyone's Favorite Newcomers, Restaurant Standbys, and their attempts to Describe 2012 In One Word. Now, we ask, "What were 2012's Biggest Dining Surprises?" Responses are related in no particular order; all are cut and pasted herein. 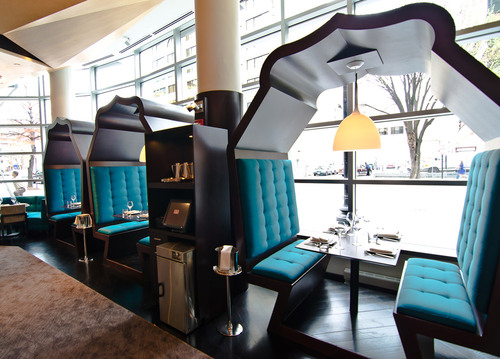 Jamie Liu, AskMen writer and Eater contributor: The closing of Kinkead's, and there is only one Michel Richard restaurant open in the DC area right now.

Jennifer Nycz Conner, The Back Page, WBJ: Rasika West End. I'm not normally a huge fan of Indian food, but this was really good.

Jessica Voelker, Online Editor, Washingtonian: The fact that Daikaya is still not open.

Jeff Dufour, UrbanDaddy: The ascendancy of ramen and pho

Jenny Rogers, former Yeas and Nays columnist and City Paper editor: Ceiba. They have a lot of seafood, which I don't eat, on the menu, so I feared their non-fish dishes might taste like afterthoughts. I was pleased to be mistaken. Delicious meal.

Michael Martinez, producer, the Kojo Nnamdi Show: I moved to McLean Gardens in the fall of 2011, and it took me a few months to try out Bistrot Le Zinc on Macomb Street. I finally ate there in January of 2012, and I've since come to the conclusion that it's one of the best things going on this side of the city. Simple atmosphere. Fantastic mussels.

Michael Birchenall, editor and founder, Food Service Monthly: PABU ? in the Four Seasons Baltimore ? with a spectacular Sake selection created and cared for by the @heysakelady Tiffany Dawn Soto, Japanese style
cocktails, sushi, shasimi, robatayaki ? so good it would be a regular stop, but I would have to move to Baltimore ? the "Happy Spoon" oyster, uni, ikura is a dream bite

Eun Yang, NBC4: The not so rave reviews for Equinox and Minibar were surprising. I still want to go.

Tim Carman, food writer, The Washington Post: The continued roll out of more and better food trucks. On any given day, some really fine lunches are being served by the trucks around Farragut Square.

Mary Kong-DeVito, Girl Meets Food: New Young's Deli.  It's situated by the loading docks behind Union Market. It's a dump, but it's delicious!

Erin Hartigan, Senior National Editor, CityEats: I think the most pleasant surprise has been the concentrated excellence of Union Market. I'd held my breath for something very cool to happen there, and it's surpassed my expectations, rounding up an all-star squad of culinary talent from around the region. Sign me up for a permanent bar stool at Buffalo & Bergen or Rappahannock Oysters any day.

Svetlana Legetic, publisher, Brightest Young Things: I think RANGE will be that, for everyone. And Rasika West End.

Nycci Nellis, founder, TheListAreYouOnIt: Izakaya Seki. You really shouldn't judge a book by its cover, or in this case I shouldn't have assumed that this little restaurant would be less than it is. Clearly, a must visit.

Tom Sietsema, Food Critic, The Washington Post: Personally, I expected to give Minibar by Jose Andres a rave for the marquee chef's relocated restaurant.