Share All sharing options for: Drew Trautmann Kept Things Seasonal from the Start 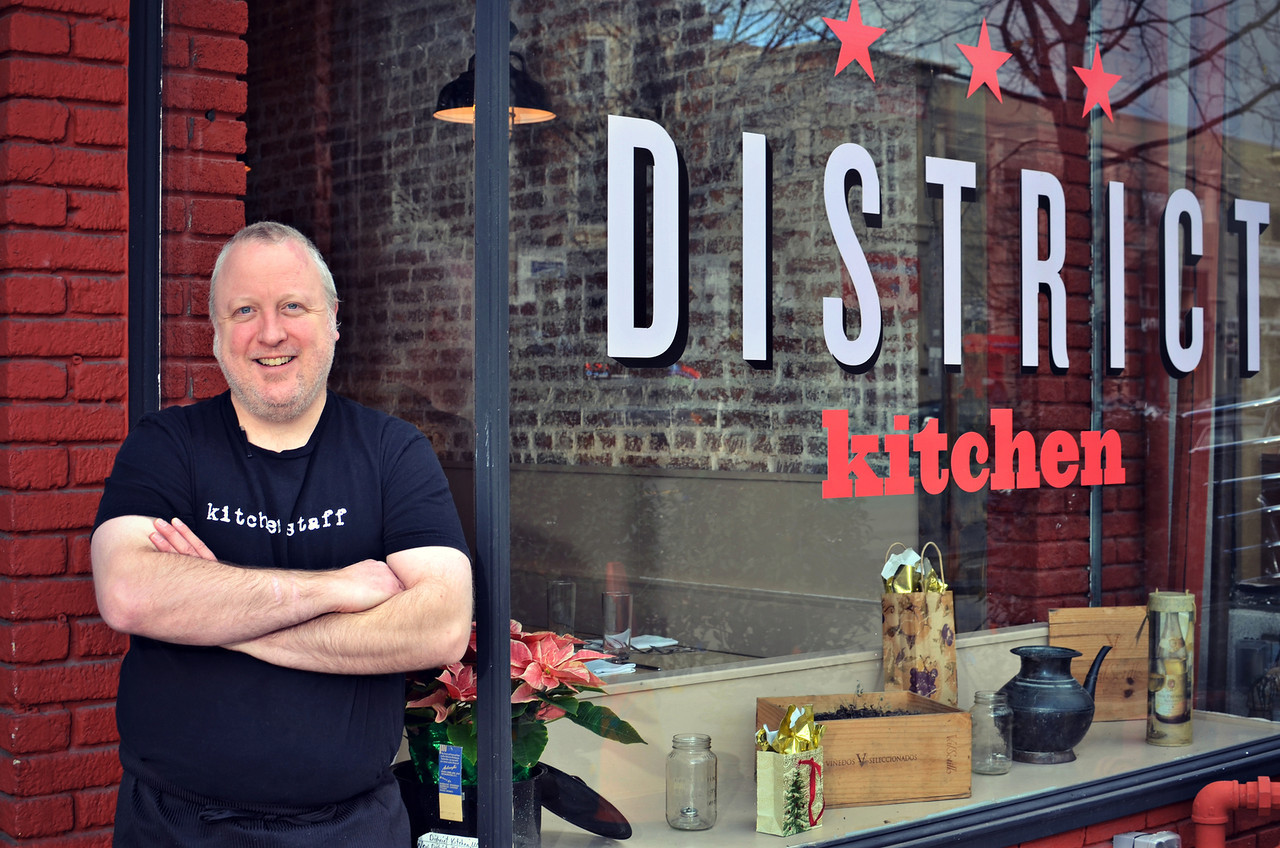 District Kitchen opened its doors almost exactly one year ago, featuring seasonal foods, craft beer and rustic decor. Former Mendocino Grille chef Drew Trautmann talks about his first year at the restaurant, his attempts to keep the menu fresh, the creaks of the old building the restaurant occupies, and how he gets diners to try unique ingredients like finger limes.

Has the concept changed significantly at all since you opened?
I don't think so, really. I think we're a lot more solid. The menu is still trying to do the same things. For example, we have a pickle platter now. We took some of the stuff from the summer and put it up.
We're really seasonal, and so we change our menu maybe not in its entirety, but we change it twice a week as things come in. We keep getting more and more interesting things as they come in season. In winter it's a little more limited, though our contacts through farms still are getting us interesting stuff. Right now citrus is seasonal, and then up in the Pacific Northwest is where we get some of our fish. We have some interesting mushrooms right now. We picked up a new fish provider who provides amazing whole fish.

Who's the new provider?
It's through a company called Local Ocean. It's pristine and it's super fresh. What they've done inland is basically recreate the Mediterranean. We get branzino and dorado from them.

How has business grown and evolved since opening?
We were pretty busy initially. We didn't do a big, splashy opening, but once we were in full swing we got a lot of good business. We've kind of settled into that. A lot of neighborhood people come here. I think this neighborhood was looking for a place to go.

I was going to ask how the neighborhood has embraced you.
I think the one thing is that if you come in here a lot, you'll have a good variety because the menu changes a lot. People with kids in this neighborhood can just come somewhere that's a little relaxing. They wear T-shirts and jeans during service. But you can still have pretty nice food and spirits, some wine and beer. You can come here, be pretty casual and eat well. There's a variety to the menu with snacks, small plates, so you can have a five course dinner or a just a snack and do whatever you want.

Any major staff changes over the past year?
It's pretty similar. I've worked with the same chef de cuisine for 15 years. We picked up two line cooks that I'd worked with previously, so that was a bonus. I'd say the only rotating position has been the dishwasher, and we've had a pretty solid one the past six, seven months.

What dishes have been really embraced by diners?
One thing we're probably going to be bringing back this month is jerky. We stopped doing it for a little while because it just got pretty out of control. We have a pretty small dehydrator and were making jerky every day, so we were in danger of becoming a jerky factory. But it's good, it's definitely a good snack.
We don't really have anything that stays on the menu at all times. One of the things I'm proud of is that when brussels sprouts are in season, they're one of our #1 sellers. Right now, people like the pickle plate. We always have a whole fish and we always have an egg dish, but the accompaniments have changed. People seem to like having breakfast for dinner.

Have you done lunch service at all?
Right now it's just dinner. We have a small staff, and a small kitchen, and not a lot of storage. Maybe at some point we'll add brunch. But I hate to ask my people to work super late Fridays and then, on Saturday, come in at 8 o'clock in the morning.

Any lessons learned along the way?
Old buildings are beautiful...[laughs]. And that's it. They can have a lot of issues. Hopefully we've gone through all of those. The building is 100 years old and it shows sometimes. Luckily our landlord is pretty good. When you open, you learn a lot in the first year. You do less cooking and more fighting fires on stuff like repairs.

How did you feel about your critical reception so far?
I always want more publicity but I feel like we're been pretty well received critically. I felt we got a good review in the Post. He came pretty early. I felt it read better than the stars, but that's fine. But yeah, we recently got in a magazine that wouldn't seem like a big deal [Arrive Magazine], as one of the top restaurants in the Northeast. A lot of the places were from Boston, Philly and New York, and that was pretty nice. People came up to me and said, 'We read about you on the train'. And I agreed with the places in there. Pok Pok up in New York, Barbuzzo in Philly. I like being in company with them.

Any unique touches you've done along the way? I read about the kegged wine.
I feel like we always try to be pretty unique. I like to go out and find unique ingredients. The people that provide us citrus got us finger limes. They're basically citrus caviar, and come out in little balls.They really pop in different colors and there's a flavor in between lemon and lime. They're cool, though they're not easy to work with. I got some cheese curds recently so we have fried cheese curds with a fig puree.

What can we expect from District Kitchen in 2013?
We just hope to keep moving in the right direction. We're not going to expand or anything. Anyone who expands that early has a lot of guts. I think one thing is that, though we don't have a pastry chef, we've gotten a lot more involved with pastry and desserts. You'll see more of that.

· All Previous Editions of One Year In [-EDC-]