Share All sharing options for: Inside Boundary Road, Opening Tonight on H Street

Editor markup for Eater Inside: Boundary Road. This is only visible in the story editor.

Boundary Road, the latest addition to the H Street retail boom, officially opens its doors to the public for dinner tonight after a brief soft-opening for the neighborhood which it hopes to woo. Located on the less-developed end of the H Street corridor — near Hopscotch Bridge — Boundary Road offers a seasonal menu from chef/owner Brad Walker, whose pedigree includes Central, Proof, Cashion's Eat Place and Fiola, a thoughtful "French industrial" design and late-night hours to be paired eventually with a late-night bar menu.

Boundary Road's menus have been floating around the blogosphere for weeks, but they'll be changing seasonally — with the possible exceptions of items like the brick chicken, quark and black pepper pierogie, and the foie gras torchon PB&J. But in the coming months, Boundary Road hopes to launch brunch, lunch and that late-night menu, which would have offerings like fried bone marrow and charcuterie. As a neighborhood-oriented restaurant, they're also planning a kids' plate that won't have an emphasis on typical fried things for kids like chicken tenders but other kid-friendly protein-and-a-vegetable combination.

Just as with the menu, the cocktail list will switch around, but for opening day there are six on the list — two classic cocktails and four new creations such as the El Luchador made with tequila, jalapeno-lemongrass syrup, lime and orange juice. They've also got eight draft beers and 10 in bottles — mostly domestic craft beers though that's not a hard-and-fast rule. For wines, they've got eight red and five whites, mostly available by the glass though a few are bottle-only.

Most impressive is all the thought that went into the design at Boundary Road. What started as an empty shell of a space builds on the trendy exposed-brick-and-reclaimed-wood design themes with lots of little touches — a collection of pitchers lines the shelves, books such as Menus For Chez Panisse rest behind the bar, and the wheat pattern of the restaurant's logo is woven throughout the menu, wall patterns and wheat stalks as table centerpieces. The restaurant also incorporating work from local artists such as Corehaus DC's James Kerns, who designed the mattress light fixture that hangs over the front of the house.

Boundary Road opens at 5 p.m. for dinner and is already accepting reservations through its website. Here's the menu: 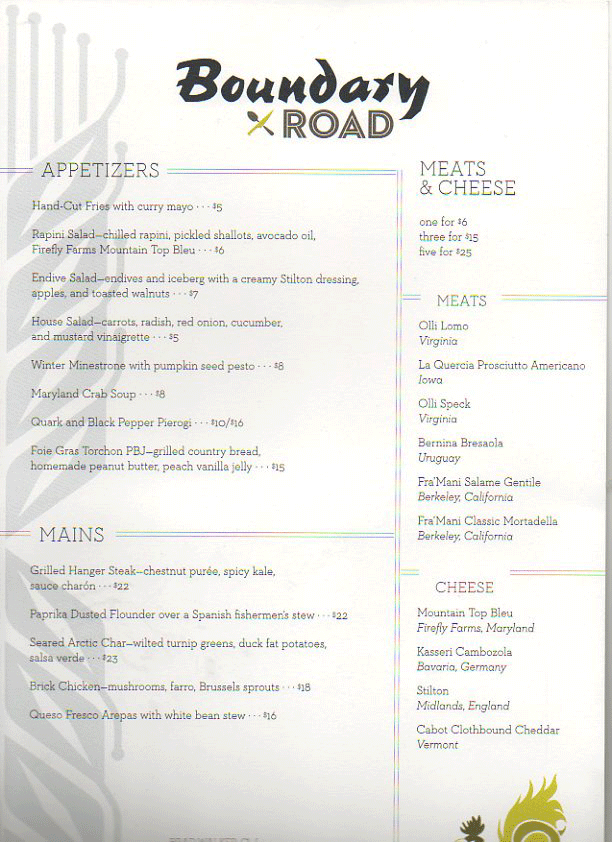 A Running List of D.C. Bars and Restaurants Reopening After an Extended Break

A Trippy Pop-Up at D.C.’s Most Accomplished Bar Makes a Case for Alcohol-Optional Cocktails