Share All sharing options for: G Street Food, Protein Bar, The Casbah, More on the Way 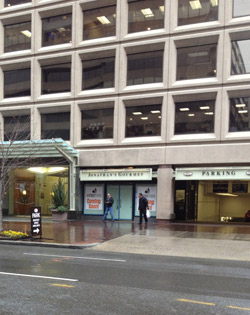 1) Dupont Circle: Prince of Petworth hears that G Street Food is moving into the space that was once home to Jonathan's Gourmet, which a commenter speculates could be the expansion of G Street Food in the Farragut West area. [PLYWOOD]

2) Penn Quarter: Penn Quarter Living spots a demolition permit for a spot called the Protein Bar in the Market Square building and wonders if this is related to the Chicago chain. [PLYWOOD]

3) Atlas District: Frozen Tropics reports that The Casbah has applied for a liquor license on H Street NE, with plans to serve Indian and Pakistani food in the 16-seat spot with a summer garden and potential for live music. [PLYWOOD]

5) U Street: The City Paper gets some details on Izakaya Seki, the Japanese restaurant moving into V Street. It'll have a small bar with an open kitchen on the lower level and a dining room upstairs. There won't be sushi or ramen, but there will be noodles and sashimi. The opening, though, is still a moving target. [PLYWOOD]

6) Dupont Circle: The Washingtonian checks in on the New Orleans Po Boy Shop headed to 19th Street and discovers a potential launch date of early April. The spot also has only 15 seats, one for each variety of sandwich, but also a seasonal patio.