Kith & Kin, Cyclone Anaya's, and Much More on the Way

Share All sharing options for: Kith & Kin, Cyclone Anaya's, and Much More on the Way 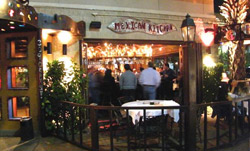 1) Atlas District: H Street Great Street reports that a gourmet pizza place named Kith & Kin Pizza Kitchen is aiming to open on H Street this spring next to Taylor Gourmet. There's not too much information out now, but reportedly the place will have customizable pizza available for dine-in and carryout but no pizzas by the slice. Also, regular, whole wheat and nine grain crusts with the possibility of gluten-free. [PLYWOOD]

2) Merrifield: The Washington Business Journal has it that another restaurant has announced itself for the Mosaic development in Falls Church: a Mexican restaurant named Cyclone Anaya's, which is a Houston-based chain. [PRE-PLYWOOD]

3) Largo: Former Top Chef contestant Timothy Dean is opening up a burger spot named Timothy Dean Burger in Prince George's County, according to the Baltimore Business Journal. The plan is to open this winter with pizza in addition to burgers on the menu. [PRE-PLYWOOD]

4) Mt. Vernon Square: Prince of Petworth learns that a hand-carved sandwich spot named the Carving Room has announced itself in the space that was originally meant to be an Italian restaurant named Caldo. This spot is not to be confused with Cafe Carvy. [PLYWOOD]