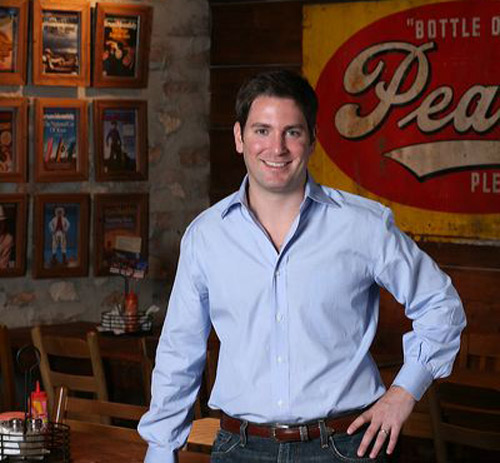 It was mid-March of last year that Marc Glosserman brought his wildly successful New York barbecue restaurant Hill Country down to DC. There was a lot of anticipation out there for the pitchers of Shiner, the moist brisket and the Blue Bell ice cream — and a fair amount of confusion, too, over their meal ticket system and cafeteria-style lines. Today, Glosserman reflects on bringing Hill Country to Penn Quarter, lessons learned and what's next for the barbecue restaurant.

I know you're from Bethesda. Was DC always the next step?
DC was always top of the list for expansion. In fact, even before we opened in New York, I had even considered for a brief period of time, Washington, DC, as a first location for Hill Country. I don't think it was a foregone conclusion it was going to be the second city we wanted to go to, but it was top of the list. But ultimately when we kind of considered all of the various things that we thought were important in terms of planting our flag in another market and optimizing our chances at succeeding, Washington just fit the bill on so many levels. And certainly not least of which was the fact that I grew up in the Washington area and was familiar with the market and still have strong ties to the city.

What made you realize it was time?
The idea of being able to recreate an authentic or close to authentic central Texas barbecue experience and share that with a city that I had a connection to was one of the things that drove me to open Hill Country in the first place and why I've always been so enthusiastic about it and always knew I wanted to have that experience in other places. We certainly didn't want to grow too fast. We wanted to make sure that we were at a level of stability with our first restaurant. I think that after about two years we felt it was time.

And how did the build go?
It was a tough buildout. The space that we're in, it's an old building. I think it was built sometime in the 1920s. Our landlord had plans to do a whole gut renovation of the building, so after we signed our lease, they spent about six to eight months just gutting the building. But we had to put in all brand new mechanical systems. We had to bring new electrical lines to the building. Everything had to be upgraded. The landlord put in a new elevator and a staircase. We had to dig out part of the basement in order to lower the floor so we could get the ceiling heights that we wanted for people that were going to be seated downstairs. When you go into old buildings, things just kind of come out of the woodwork as you pull away the layers of plaster. One setback after another. So we were delayed significantly.

How did you find it different than opening in New York?
Well, when we opened in New York, it was our first one and I didn't know what to expect. I didn't have any background in the restaurant business. And the big difference opening in Washington is that we had a track record so there were expectations because we had been so successful in New York. And we knew that we were going to be measured against people's expectations. And probably scrutinized more. I think that put an added level of pressure on us because we wanted to not only do as well as we had done in New York, but hopefully improve on our New York restaurant.

What sort of things did you change?
We have a much bigger bar in Washington upstairs. The other major thing that we did was we created a whole separate area in the back of the restaurant, which is where all of the food is. That's all contained in one section of the restaurant. And the dining room is just adjacent to it. That's what we had hoped to do in our first restaurant but because we didn't have the space the marketplace and the counters in New York, they're jutting into the dining room. There are certain aspects of it that make it potentially a bit more intimate and quirky because of that, but traditional Texas barbecue joints usually have your room where you go and get your meats in the back.

And how did the opening go?
The opening went great. It was funny re-reading our Year In from New York, how we repeated the same mistakes again. We had twice as many staff as we probably needed to have when we opened. Because we're not a typical, traditional restaurant with an a la carte menu and table service, everybody, including our senior management team, had to get familiar with having a marketplace and using a meal ticket. And so that just takes time to learn our system and the idiosyncrasies of it. One of the things that's common at Hill Country is someone will take you as a guest who's been and they'll teach you how the meal ticket works and they'll show you how to order and they'll tell you how much to order and what to get. So overall it was a busy opening. It was pretty crazy for a couple months in particular, right when we opened our doors. Lots of long hours and late nights. But fortunately over time things very much smoothed themselves out.

Was there anything you specifically changed throughout the year to address those issues?
Initially, we had everybody paying at the cashiers when they were finished with their meal. One of the things that we changed because we saw the lines — particularly at lunch when people are trying to get in and out really quickly — we now have our servers who will take your meal ticket and they'll bring your bill to you at the table like a regular restaurant. That's something we changed based on the feedback that we got from our guests. Some people like to get up as soon as they're done. They don't have to wait for their check. They can go straight to the cashier. Other people like to mingle and linger around for a little bit longer.

And so in this past year we've seen a whole bunch of New York-based restaurants expanding down here. I'm just curious what you make of that.
I think that Washington is just a great city. It's a great town and there's just an emerging food culture that's been taking hold over the past several years in Washington. It's a cosmopolitan city, it's got a revitalized downtown. Not just in Penn Quarter, but in U Street, Dupont Circle, Capitol Hill. There are a lot of young people who live downtown who are demanding better food options. I think that New Yorkers who are looking to expand feel that what they're doing is sort of saturated in New York. A lot of New Yorkers were going to Las Vegas. The opportunities in Las Vegas post-recession are not nearly as abundant or attractive as they were. I'd say that about a lot of places on the West Coast. In DC it's a solid, steady economy and it's just logistically so much easier to get on a train if you need to.

What's next for Hill Country?
Well, it's been a great year and we've launched a lot of things. We've launched a catering business, we've launched delivery. We've got Hill Country Live, which is a growing part of our late-night business. Our music, our Wednesday night Rock 'n Twang karaoke. It's standing-room-only at this point. And we're going to be doing a big one-year anniversary party with a special menu and a surprise musical guest. And it's interesting being one year in, we're at the point where we've got a good, healthy and growing business. We are thinking about what's next and where we might open another one. But we're really happy with how we've been received in the DC community and we're fortunate we've got a great team down there.

Does it feel like it's been a year?
No, it doesn't feel like it's been a year. I can't believe I'm talking to you about One Year In. It has absolutely flown by. I guess this time last year we were in the final throes of construction and totally stressed out about whether we were going to make it or not and have painters or equipment people scurrying around in the space. It's gone by really quickly, but that also seems like a distant memory.

For more One Year In posts published today across the Eater Universe, head over to Eater National.

A Running List of D.C. Bars and Restaurants Reopening After an Extended Break

A Trippy Pop-Up at D.C.’s Most Accomplished Bar Makes a Case for Alcohol-Optional Cocktails