The DC area is home to a lot of restaurants, and among them are hidden gems that many Washingtonians aren't unearthing. To help guide us to these potential discoveries, we've enlisted some of our city's many food players to share with us their under the radar recommendations for Dining Confidential. 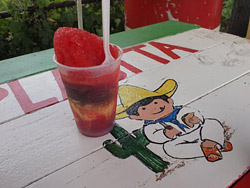 John Melfi honed his culinary skills under Jeff Buben at Vidalia before moving on to become chef de cuisine at Blue Duck Tavern. And it seems kitchen business wasn't the only knowledge he picked up from his former boss.

"My favorite hidden gem is Taqueria La Placita in Hyattsville, MD. Jeffrey Buben, chef/owner of Vidalia restaurant, told me about La Placita and their traditional style tacos, so it became a place I use to meet my buddies on the weekends for tacos.

When you arrive at La Placita, you will almost always see a line. Once you enter, you will hear the sound of a cleaver chopping a roasted pig. They serve several different kinds of tacos, but I mostly go there for the pork. They typically serve most parts of the whole animal, such as the belly, tongue, ears, and skin. The tacos are served simply and traditionally with cilantro and onions and they are also accompanied by a caddy of condiments to garnish.

The best part about La Placita is that you can eat, and leave satisfied, for about ten dollars!"

Taqueria La Placita [Photo: This Is Gonna Be Good]