Share All sharing options for: The Columbia Room's Derek Brown on Dishonest Yelpers

Welcome to Eater's latest feature, Shit People Yelp, in which we ask restaurateurs about the Yelp reviews that left them scratching their heads. 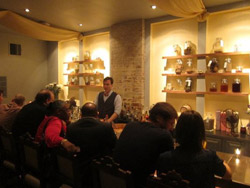 First up on Shit People Yelp, Derek Brown has a few words for the Yelpers who leave reviews for his ten-seater bar the Columbia Room even though they don't seem to have ever been to the Columbia Room:

I'm very lucky. Until now, I've enjoyed a privileged status within Yelp. My bars are more or less positively reviewed, so I don't have an axe to grind. And, ultimately, I respect Yelp's potential as a place of flourishing food-criticism democracy, which hopefully makes this sound a little more sincere when I say that Yelp is too often highjacked by idiots.

Not all Yelpers are guilty but unfortunately I've read one too many asinine comments on Yelp about hardworking, passionate restauranteurs, chefs and bartenders who are arguably running some of the top restaurants and bars in the District. I don't know if it's the relative anonymity, ease of use, or the fact that computers have yet to install breathalyzers for repeat offenders, but it sometimes diminishes my hope for the world.

Let me give you an example. This little gem was about Palena, owned by celebrated chef Frank Ruta.

"The pickled vegetables were too sour; they reminded me of vegetables + vinegar."

Frank Ruta, who has been awarded three-and-a-half stars from the Washington Post, and has a James Beard Award under his belt, makes amazing pickles that would top Portlandia. In this case, the reviewer is just plain wrong. However, I absolutely respect their right to be wrong. What I can't respect is that they don't even know what the [expletive] a pickle is.

That's somewhat extreme but here's one I've unfortunately seen more than once on the Columbia Room's Yelp page.

"Came here with my crew last weekend and was not impressed with the scene. Long lines for drinks and overcrowded but they do have some pretty good drinks."

I instinctively couldn't care less what anyone who has a "crew" thinks about my "scene," yet he does have two reasonable criticisms: long lines and overcrowding. The thing is that the Columbia Room is a ten-seat, reservation-only bar. It's not overcrowded and there are never lines. This person has obviously never been to the Columbia Room. This is simply dishonest, even if it's unintentionally so.

All I ask is that any reviewer, professional or amateur, follow a modicum of ethics, rigor and discretion when writing a review. And be honest. Think about it like this. One should treat Yelp writing as if they were talking to somebody's mother. Because they likely are.

· All Coverage of the Columbia Room [-EDC-]