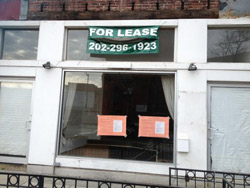 1) 14th Street: Borderstan has the details on the new brick-and-mortar spot coming to the corner of 14 and T from the BakeHouse folks, whom you might have seen at the DC Grey Market. They'll offer a menu of things like scones, cupcakes, brioche cinnamon rolls, quiches and perhaps a brunch with made-to-order waffles. [PRE-PLYWOOD]

2) Logan Circle: Prince of Petworth catches a liquor license application for an Italian gastro-pub and wine bar and Dining Bisnow reveals that this is from the Hilton brothers, the team of restaurateurs behind Marvin, The Gibson and more. The space will keep the live music aspect of the space's former tenant, HR-57. [PLYWOOD]

4) Union Station: Prince of Petworth has it that Roti is the latest of the stream of fast-casual restaurants opening up in Union Station. It'll be located on the west side near Chop't, Potbelly and Chipotle. [PLYWOOD]

5) Bethesda: The Washingtonian gets some intel on a restaurant named Majestic that is not in any way related to The Majestic run by Cathal Armstrong out in Alexandria. But it'll be a sports bar with a "creative American" menu and is intended for thirtysomethings. [PLYWOOD]

7) Del Ray: Patch reports that Grape + Bean's new Rosemont location aims to open in the next four to six weeks. Signage is installed and they've got some pictures. [PLYWOOD]

8) Bethesda: Thrillist takes a look inside Haven Pizzeria Napoletana, which is set to soft-open next week in Bethesda. It's got two pizza ovens and a menu full of pies that are customizable. [POST-PLYWOOD]