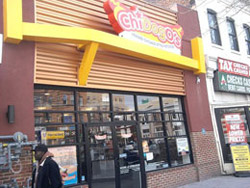 1) Dupont Circle: Prince of Petworth sees signage announcing the impending arriving of Sweet Diablo and its supposedly "best chocolate cake in the world" coming to 19th and M streets. [PLYWOOD]

2) College Park: The University of Maryland Diamondback took a look at five new restaurants headed to the university area. Not only is the university getting a ChiDogO's, as has been planned, but also Roti, a place named Pho D'Lite, Lime Fresh Mexican Grill and District Dumpling. [PLYWOOD]

3) Old Town: Patch hears first word that an Old Town resident seeks to bring a cafe and wine bar named Half Full to North Columbus Street near the Lyceum. An application filed with the city reveals a menu of "personal pan pizzas, salads, charcuteries and sweets" with outdoor seating, table and bar service. It goes before the planning commission in May. [PRE-PLYWOOD]

6) Petworth: Thrillist checks in on DC Reynolds, which has a 75-person beer garden and a menu that's still technically in development phase but will involve buttermilk biscuit fried chicken, meatloaf and a DC Brau bratwurst. But the good news is that they plan to open this weekend with 10 craft beers on tap, including several local beers. [POST-PLYWOOD]

7) Downtown: We learned in December that Dallas-based chain Del Frisco's Grille is heading to the old Les Halles space and now this Craigslist ad indicates that they're hiring and on track for an early summer opening. [PLYWOOD]