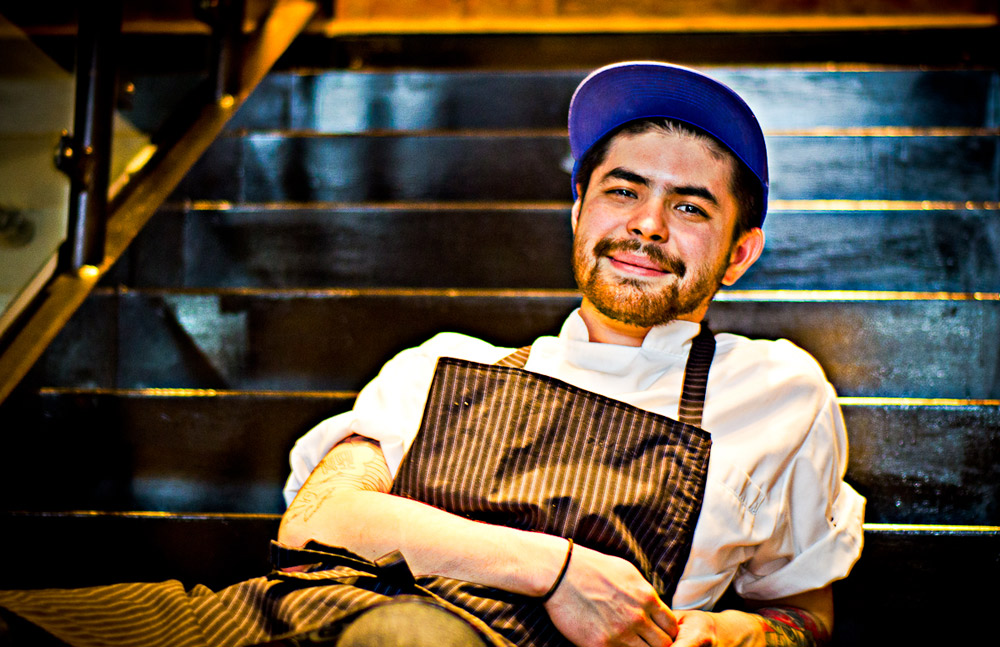 Toki Underground has been more or less slammed with ramen-seeking Washingtonians since it opened its doors on H Street last year, with no signs of letting up. Sure, seats are limited in the noodle shop, but there's also just a perpetual buzz around the place whether they're hosting guest chefs like Scott Drewno, making appearances on Cooking Channel shows or nabbing 2.5 stars from Washington Post critic Tom Sietsema. Oh, and not to mention Toki Underground's win at the Eater Awards as the restaurant that's So Hot Right Now. Chef/owner Erik Bruner-Yang took a few minutes to ruminate on the popularity of his ramen shop, the embrace of the neighborhood and what's in the future for Toki Underground.

How did the concept come about?
The concept of Toki Underground? It's based on my family recipes and growing up in Japan and Taiwan and those types of life experiences. Every time I travel I always have been taking sketches and thinking about things that I like and taking pictures. It's a culmination of all of those into one place.

How did you develop the ramen recipes? Did you get family together and test things out?
My mom comes quite frequently. She kind of taste tests everything and makes sure they're up to her standards, whether or not they're my standards. The family has been really supportive of me. It's not completely true that it's family recipes, but that's what they're based off of.

And how did the buildout go?
The buildout took us a little bit longer than expected. They had a really small budget and we built everything by hand. And then we just kept adding little art projects one after another. But we're really happy with the way it turned out. It was all super DIY. One of my partners has his own contracting business, so we didn't use any major construction company. Everything was pretty low-key.

And how was the opening?
It was crazy. I always had this feeling that it was going to be busy, but I never thought we'd be so lucky.

How slammed was it?
We did two weeks of soft openings before the grand opening. We've been as busy as we were from the first day to where we are now.

Was it a lot of people from the neighborhood at first or were you having people from all over right away?
I think because our opening got delayed for so long and we were the only ramen shop, it was just like... people have been wanting ramen in the District for a long time. I didn't really realize the kind of demand that we've been getting. It's obviously a blessing. I could be happy just serving the neighborhood and 40 people a night. Ramen, people really love ramen.

So what things have you changed throughout the year? Any lessons you've learned?
I think I've learned to be a better communicator with my staff, or at least I try to be. I have more employees than we have seats and I take real pride in that. I think some of my initial failure was not being able to communicate well. Because, you know, I hired a lot of my friends, which isn't always the best thing. So I think my communication skills have gotten better in being able to express openly my standards.

The dumpling recipes have stayed pretty much the same. We changed the wrapper recipe and we changed the way we folded the dumplings to make them a little bit more delicate. People used to complain they were too chewy. The ramen has changed a lot. Before I was really just trying to make something really traditional based off of my experiences. But now it's kind of evolved into what I think is more our style. Before it was just one kind of stock and now we make four different stocks and combine them all. At first it was out of necessity to keep up with the demand, but now I'm really happy with the recipe and the flavor.

How about adding limited reservations through City Eats? What made you decide to do that?
I really like their website platform. It was mostly just to be on their website. Since we are in the Capitol Hill area, there are a lot of families and stay-at-home moms and more of them have been more open to coming. Most of the people who have been making reservations have been families whose kids can't wait. We're not the most kid-friendly place because of the setup so it is nice to see more families in the restaurant. I'm happy that we did it. If we're going to expand the reservations... probably not because we have to do volume. We have to fill the seats and first-come first-served is the only way to really do it.

And you have been doing a lot of bringing in guest chefs. How have those come about and are you going to be doing more?
I think it's good for me because I never want to stop learning and I can't work for other chefs anymore and it's just a great way for me to learn from people that I respect. And it's fun for the staff to break up the monotony. We try to have a high level of service. I think any of my employees could go work at some of the best restaurants in the city. So it's nice to showcase my staff a little bit and then for me to learn from other people.

So how has the response been from the critics and from the neighborhood?
There's a lot of ramen aficionados and some love it and some don't. We have a lot of Asian regulars. That's kind of how I judge that it's still good. And then the neighbors have always been really supportive. I live on H Street and they know that I'm just trying to make my mark on the neighborhood by respecting it. It's great to have regulars. I love all my regulars.

And you got 2.5 stars from Tom Sietsema.
Awesome, right?

Yeah. Were you expecting that?
Absolutely not. It was a really nerve-wracking time because I knew he was coming. I know what he looks like. As soon as I saw him, I was like, "Shit, I'm going to have to work a lot this next month." And it was during a really hard time in my personal life, so it was really stressful. The first time he came, I sent his table out the wrong food and I was like, "I am so fucked." And he always came Sundays at 5 o'clock when we seat the whole restaurant at once. I couldn't be happier for a little $10 price-point place to get 2.5 stars.

And so what's next for Toki Underground?
Just one day at a time. I don't really know. We got through one year and hopefully this next year will be about perfecting everything. You know me. I always want to keep challenging what we're doing and pushing the envelope, but we also have to recognize that it's still a business.

Does it feel like it's been a year?
No. I'm so blindsided by this Suna thing next week and then after that I'll think about what we'll do for the One Year. I think we'll just do a discount period for a couple days. We're going to do the Sweetgreen festival and we'll take all the employees so it'll be like a one-year work-and-party. Mostly party. We're going to do a Toki Underground-style hot dog tent and then we're going to serve ramen in the VIP lounge. We're going to do a ramen we haven't done before, a shoyu ramen, which is more just a chicken ramen.

I do think my goal for the next year is to make sure that everything we're using is sustainable and local and try to figure out how the consumers don't have to pay the price for it. The menu is going to change in the next six months. A lot of the popular specials will end up being on the menu all the time and maybe weed out one of the ramens and replace it with another that I've been working on. I still haven't figured it out, but we want to keep it fresh. I've been lucky there's been no competition. So I'll have to make sure we stay the best and make it interesting so people will want to keep coming back.