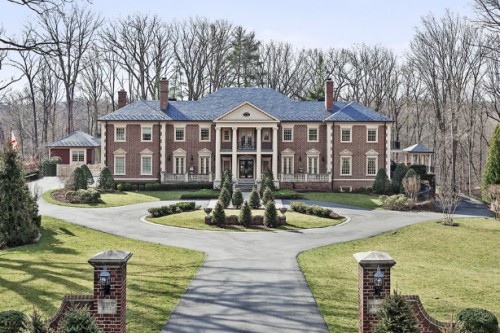 This used to be Republican-occupied territory in McLean. Now its for sale. Photo from HomeVisit.

MCLEAN—There's a now-divorced Republican power couple, Ed and Edwina Rogers, who have listed their mega-mansion for $8.5M and the most interesting thing to see is not the pictures of the house (even though they are impressive). Instead check out the video of the wife, Edwina Rogers, wrapping gifts in dollars bills.

FORT TOTTEN—Construction will start soon for the Art Place At Fort Totten, which is one part of a multi-phase project to bring the neighborhood back from blight. We have a rendering of what the building is supposed to look like.

GEORGETOWN—In case you haven't heard, there's a Jonathan Adler store coming to Georgetown this May in the space where the Gap Kids used to be on Wisconsin. That's all the information we have, so no need to click through the link, but it's here in case you really want to see the same info on Curbed. (We hate making you jump for no reason).

MCLEAN—We don't usually have this much McLean news in one week, but the White House replica on Towlston Road has been taken off the market and a very contemporary house overlooking the Potomac designed by starchitect Hugh Newell Jacobsen is on the market for $9M.

BETHESDA—This week we looked at southern Maryland for the ten least expensive homes in the area. There are a surprising number of affordable condos.

ROSSLYN—There's a house by Key Bridge for sale for $1.025M that gives you Georgetown views, but none of the noise of the city streets.

NAVY YARD—Construction workers dug up an unexploded ordnance that weighed 1,000 pounds earlier this week, but if you want to see a nine minute video of Navy Yard when it was in full swing as a weapons manufacturing site click on over. In other news, the Foundry Lofts apartment building announced it was 80% leased so here are some pictures of their model unit in case you were thinking of living there.

EVENTWIRE—One of the people behind the Case-Shiller Index, Robert Shiller, will be at Politics and Prose next week to promote his new book Finance And The Good Society.