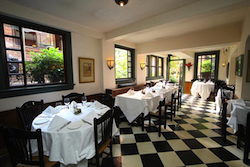 No doubt you've heard the news that 12 days ago the popular New York tapas restaurant Boqueria, opened a branch in DuPont Circle. But did you know that before entering the culinary fray Boqueria's owner, the globetrotting Yann de Rochefort, was a former D.C. resident and student at Georgetown University? His anecdote below reminds us that there's more to Tabard Inn than just its charming brunch offerings.

"When I was at Georgetown, I used to meet up with friends at the Tabard Inn to drink beer and play darts. We would meet there every other Wednesday with a group of other expats – French, Spanish, Brit, Aussie, etc. I had my first introduction to fish and chips with those guys at the Tabard and it was incredible.

It was a really welcoming place for students like us who were far from home because it feels like an old English pub when you're down in the bar, and a classic French bistro in the sun room. It’s a bit quirky and eclectic, but still a great spot for relaxing and getting out of the fray."