Editor markup for Pepe the truck!. This is only visible in the story editor.

People of Washington, the time has come: Pepe, the new food truck from José Andrés, has officially been unleashed to sell Spanish sandwiches to the masses. After weeks of testing out Pepe across town — at his child's birthday party, feeding the homeless, etc — the chef himself was on hand this morning at a media preview across the street from America Eats Tavern, plying people with sandwiches, passing around napkins to clean up after some of the truck's messier options and chasing down people on Segway tours to give them a taste. And now the truck will officially be out on the streets of DC serving lunch between 11:30 a.m. and 2:30 p.m. on weekdays.

As you can see below, Pepe has a fairly large menu for a food truck, with eight total sandwich options. Not all of these will be available every day, though, but either way Andrés says he's confident that his team and the truck can handle such a diverse menu — a pork burger, fried chicken breast, veggies, Ibérico pork, beef tenderloin and more among the options. Ingredients were one of the main concerns with Pepe, says Andrés: "I want good cheese not crappy cheese, good ham not crappy something and that's it." So the bread comes from Panorama bakery and one of the sandwiches sports Ibérico pork and Serrano ham and will set you back $20.

These flauta sandwiches are what the chef grew up eating in Spain and there are stories behind them: his father used to make him fried chicken sandwiches when he went on school trips, for example. There's also a sandwich made with chicken, bacon, lettuce, tomato and shallot mayonnaise named for his team: Futbol Club Barcelona. Quote Andrés: "I think I'm going to lose a lot of Real Madrid fans." There's also a chocolate-and-hazelnut ice cream sandwich, non-alcoholic cocktails, potato chips and soup.

Fun fact: the ThinkFoodGroup is running Pepe under its catering umbrella, meaning that the truck will be available to rent out for office parties and all sorts of special occasions. The glittery silver truck is purposely not emblazoned with the name Pepe so that the team can occasionally use the truck for Oyamel or Andrés' other restaurants. Like with any truck, you can find Pepe on Twitter. And, without further ado, here's the menu: 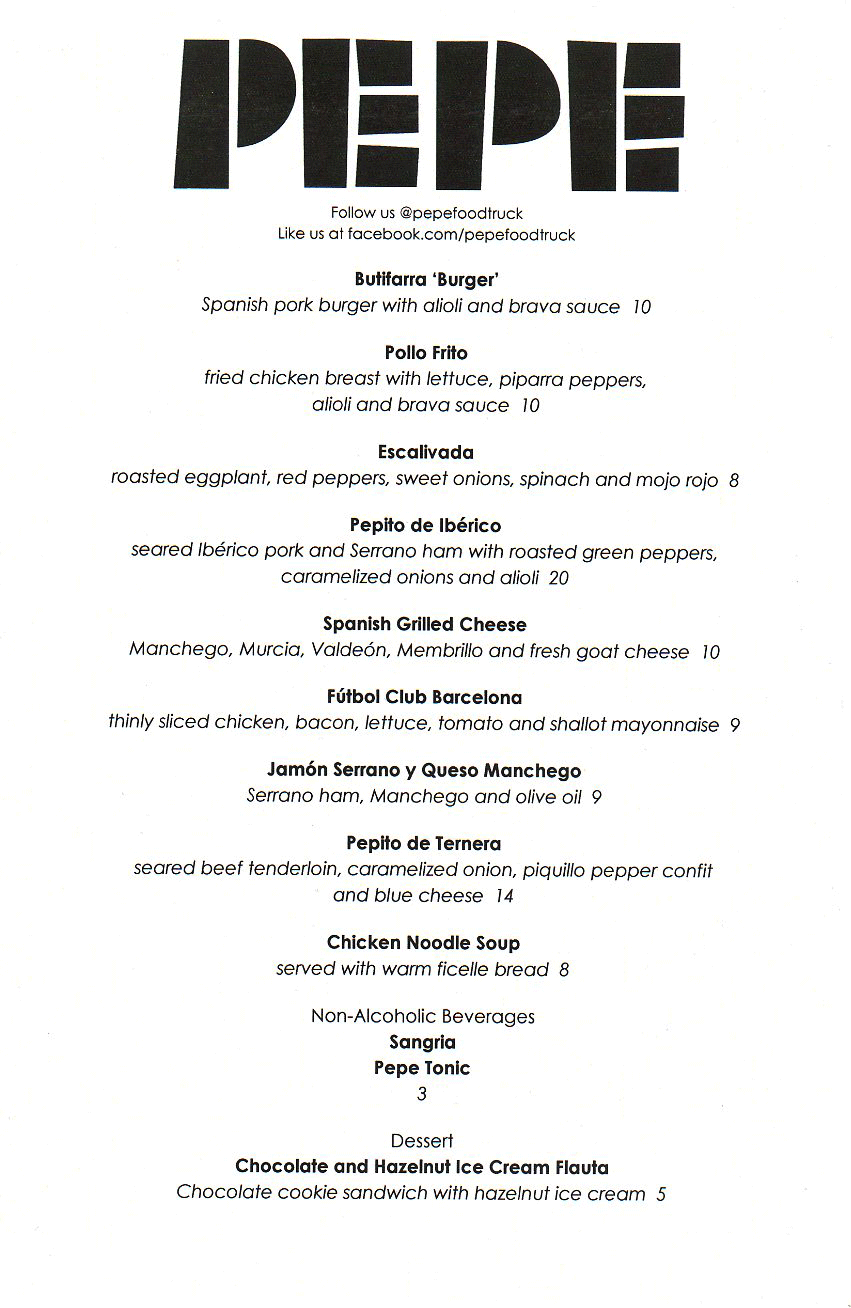