Editor markup for Week in Pepe. This is only visible in the story editor.

Here's a sampling of the kind of lines people faced this week while trying to get to Pepe.

Oh boy, everyone's favorite quotable Spanish chef José Andrés unleashed his first-ever food truck Pepe on the streets of Washington this week and the level of frenzy has been alarmingly high all week long. Eater, of course, was no exception. So there was plenty of tweeting, plenty of line-waiting, plenty of photos grabbed and words spilling out across the Internet. So to play us out of Pepe's very first week in business, here's your obligatory roundup of all the madness.

1) The media was ON IT, with stories filed by the Washington Business Journal, Urban Daddy, Thrillist, Brightest Young Things, DCist, Revamp, Dining Bisnow, the Huffington Post, Washington Examiner, the Washington Post, The Daily Meal and, oh yes, even the Associated Press so that the people of Sacramento and beyond could learn of Washington's good fortune.

2) On Pepe's very first day in action, HuffPo DC rounded up the reaction from folks on Twitter, who pretty much all said it was delicious.

3) The critics weighed in pretty quickly, with the Post's Tim Carman and the rest of the paper's Food section determining that the sandwiches were worth the long wait in line. Also, the City Paper's Chris Shott reported that the $20 Ibérico ham sandwich "doesn't suck,"** prompting the following Twitter exchange: 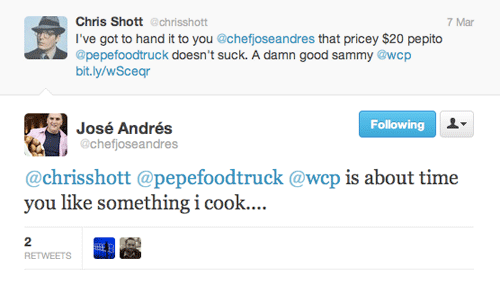 5) No, Southern Living magazine is not based out of DC, but that didn't stop them from tweeting:

6) The debut of Pepe even prompted press releases from other food trucks, including the folks behind Basil Thyme, who are happy to have Andrés join their ranks — and would like to point out that they also have good things to eat: "With the brand new Jose Andres' Pepe Food Truck boasting a $20 Iberico sandwich and the oft-written-about Lobster truck with an $18 meal deal, Basil Thyme which always has at least 4 different hand-made lasagnas and a manicotti– also boasts a ‘luxury’ food : a popular lasagna that features the $300/pound Black Truffles paired with gorgonzola and Portobella– for only $11! 'We’re excited that Chef Andres has recently entered the food truck arena. It helps underscore the idea that food trucks are capable of serving fantastic food.'" [EaterWire]

7) NBC Washington checked in with the truck today and learned that Pepe has had nearly 200 visitors a day since it launched. There's also this video below.