The Pretzel Bakery, Epiphany and More on the Way

Share All sharing options for: The Pretzel Bakery, Epiphany and More on the Way 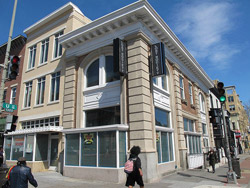 1) Capitol Hill: The Hill Is Home has it that The Pretzel Bakery will open later this month in Hill East selling fresh pretzels accompanied by mustards and dips from a Philadelphia-bred owner. [PLYWOOD]

2) Petworth: Prince of Petworth notes that a sandwich spot named Epiphany is headed to Petworth with options like a crab cake sandwich, a Reuben, lean hot pastrami, a prime rib dip and more. The plan is to open by May 15. [PLYWOOD]

3) U Street: Dining Bisnow reports that Local 16's Aman Ayoubi and Utopia Bar & Grill's Jamal Sahri are opening a Brazilian lounge in the underground level of the Lost Society building at 14th and U streets. It'll have live music and could open as soon as five-to-six weeks from now. [PLYWOOD]

4) Arlington: ARLnow learns that another Chipotle is headed to Arlington, this time closer to home-grown favorite District Taco. It'll take over the former Cafe Parisien space in the Lee Heights shopping center. [PLYWOOD]

5) Maryland: Flippin Pizza is going for an all-out expansion in the next four years with the news of a seven-location development agreement courtesy of Citybizlist. The first should open in the next few months, but the overall expansion will take four years. [PRE-PLYWOOD]

6) Arlington Ridge: ARLnow also gets word that a Starbucks and a froyo chain Sweet Frog are headed to Arlington Ridge Shopping Center on Glebe Road. [PLYWOOD]

7) Silver Spring: The Post checks up on Masa Japanese Steak House Hibachi & Sushi, which is now in a soft opening phase and will run for two weeks as they stock up on liquor, having only just gotten the liquor license. It'll have a nine-seat sushi bar and " a Benihana-like demonstration zone." [POST-PLYWOOD]