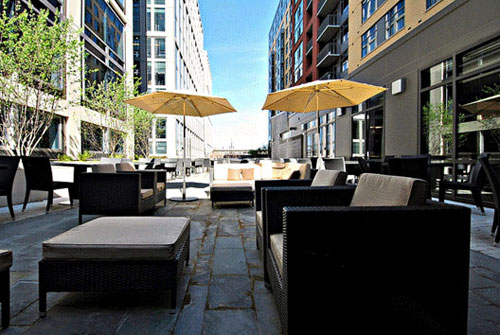 This past year has been a busy one for restaurateurs Todd Gray and Ellen Kassoff Gray. They went from being owners of a post-fire Equinox to empire-builders with the April opening of Watershed, a new concept at the Corcoran Gallery of Art, a resort in the Dominican Republic and now a cookbook on the way. Oh, and Gray finally took the title of Chef of the Year at last year's Rammy Awards, while Karen Nicolas joined their team as executive chef at Equinox and promptly won Food & Wine's prestigious Best New Chef award.

But the reviews for Watershed were tough, and it wasn't long before the restaurant sacked its chef de cuisine. And two months ago, the restaurateurs turned Watershed's operational management over to a company named Culinaire. Eater caught up with Kassoff Gray to rehash the first year of Watershed, how the partnership with Culinaire is going, what she would have done differently and why, all in all, life is good.

How did the concept come about?
Todd and I are great road-trippers. And we happened to get a lot of inspiration for our concept from the road on the East Coast drives. We always like to stop at these crab-shacky-type places along the way, all along the Atlantic coastline. We just really liked the idea of it being easily accessible off the road. That's how we came up with Watershed, East Coast road trips from Florida to Maine and all in between. We called it Watershed because the nature of a watershed is to unite a community. It's a body of water that brings together so many different elements.

So you ended up in a hotel in NoMa. How did you find the spot and why the hotel?
Lessons learned. Well, that happened quickly. We had had the concept long before the space. It was one of those opportunities that came about very quickly and Equinox was closed to the fire when we met the real estate developer who was doing that property. He told us of these plans in a neighborhood called NoMa and we were like, "What's NoMa? Where is that?" We went by and saw the space and thought, well, this is ambitious. An ambitious project. We only had about five months to get it together.

So how did the build and the menu-planning go for Watershed?
The buildout was great because we didn't have to really deal with it much. But in the end one of my great regrets was that I didn't speak up more how the end result was going to look. I was somewhat naive. With Equinox we had such control over the look. Going into a hotel, I learned that you really don't have as much control as you think you're going to have. Because there's a certain corporate standard you have to abide by. It happened fast. There's something to be said for slowing things down a bit. Growth can happen too quickly, too.

Would you pick a hotel if you did it again?
Not in the capacity we opened in. Maybe in the capacity we have now with the operating agreement with Culinaire. I can't operate a hotel. I'm too boutique oriented. But Culinaire can. They've been great in how they've taken over the day-to-day. That's the big thing that's happened in a year. I wouldn't operate a hotel again without a partner like Culinaire.

So how did your opening go?
t was great. It's that old pioneering of a neighborhood. The residents of NoMa are so awesome. Hotel guests come and go, they're not usually your regular clientele. We got to know so many wonderful people from DCPS, which is right across the street. From Homeland Security. All those government agencies in the neighborhood and the residents of the Flats. The best part about the opening was how excited they were to have a sit-down, a bar, a place they could go because NoMa is so emerging.

And you guys got some tough reviews from the critics. How was that?
You know, it's never great because that came out within 90 days of us opening. You always wish there was a little bit of a ramp-up period. But it is what it is. You can't change it so you have to accept it and move on and always look at it as constructive criticism from people who dine out a lot. At the same time they were saying that, there was 20 other people saying how much they love it. So you take it with a grain of salt. It's never easy to get slammed publicly. It made us go through some major changes.

When did you make the decision to change chefs?
Well, I don't think it was because of the review. It was sort of the icing on the cake. Restaurants get reviewed so quickly now there's no more learning curve. You'd better be ready the second you open your doors. That's the facts. Changing the kitchen crew wasn't solely based on the review, it was based on other things, work habits and things like that. I would never let somebody go because of a review. I don't think that would be fair. But I also think it's tough for a chef to recover from that.

Sort of a psychological thing?
Yeah it hurts. This is the craft I love the most, this is what I do for a living. It's not an easy thing, especially when you have lots of other stuff going on. You gotta roll. Because we're in a public sort of... we chose this. And if [reviewers] want to come back, great. If they don't, great. Whatever. We just stick to the people that are there every day and focus on that.

And so how has the transition with Culinaire been going?
We have to get used to each other's styles. I think Culinaire is a great company because there's some management companies that just come in and just do their thing. But I think Culinaire wants to work with our style. They very much embrace it and know that's the identity of the restaurant. So that's good. But they have systems and checks in place that maybe we didn't.

Like what?
I think in balancing numbers. Restaurants are numbers and that's why there's such a great rate of failure. You can have the best concept in the world but you've got to make the numbers work. So they've been teaching us a lot about numbers and making sure they're achieved. And they've been learning how to take Todd's recipes and make sure that they're more standardized, that you're using the same amount of ingredients every time so you can really control your costs. They photograph it, they watch him do it, they take notes while he's doing it. Because really it's the food.

When we talked before you said you'd have to wait and see who won the arguments.
Those are still playing out. I've been twice to check up and it has been excellent. I was really pleased. I don't think they stripped it down where I thought they might. I was scared in the beginning, but they kept the integrity. That's what I like about this company. I didn't know about them, but I would have worked with them from the beginning.

So there's a lot to be said for these new-style management companies cropping up. It's a new kind of company because of the popularity of chefs. They know they can't just go and put in homogenized cookie-cutter food. They have to put in something with style and personality. So I think chefs are becoming more important to these evolving styles of management companies. And they're more important to us because they're better at financial accounting and number-crunching than we are. We're much more on the creative side. And together the two shall meet. I think it's a new business model for a lot of multi-property chefs.

So does it feel like it's been a year?
No. It was Earth Day, April 22, when we opened. Who got married on Earth Day? Todd and Ellen. It was our 17th anniversary, too. It's been a year for Watershed. Does it feel like it? No. It's been 17 years I've been married to Todd, does it feel like it? No. Feels like five years. Because we're having fun. Life is good. So it goes really fast when you're having a good time. We're having fun and that's not going to change. I just want to hit the road more this summer. Get out on the road and try the lobster shacks up in Maine.