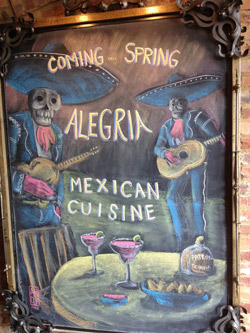 1) Vienna: Tom Sietsema reported last week that the owners of Bazin's on Church in Vienna are opening up a new restaurant next door named Alegria. It'll be Mexican food with a tequila bar, mostly small plates and inspired by Chicago chef Rick Bayless's Frontera Grill. It could open as soon as next week. [PLYWOOD]

2) Bloomingdale: Dining Bisnow tweeted that coffeehouse Showtime Lounge is headed to Rhode Island Avenue, and Prince of Petworth got more details from the liquor license application indicating that it'll have "coffee, pastries and house made dips and snacks" during the day and "beer, wine, spirits and finger food" in the evening. [PLYWOOD]

4) Columbia Heights: New Columbia Heights reports that a new spot named Koffee's Lounge is headed for Georgia Avenue. Menus are not up on the website yet, but it appears there will be food, coffee and plenty of booze at this forthcoming bar. [PLYWOOD]

5) Arlington: ARLnow reported last week on the opening of a "Bayou-style seafood by the bucket" restaurant named Chasin' Tails in Westlee. They've got a bunch of flat-screen TVs plus a full bar and the grand opening party with a New Orleans-style jazz band is scheduled for Saturday. [POST-PLYWOOD]

6) Florida Market: Meanwhile, Frozen Tropics learns this morning that the Korean restaurant at 3rd and Morse is under new ownership and is now named YoohHa's Kitchen & Deli, serving Korean and Salvadorian food. [POST-PLYWOOD]