Here's Where Celebrities Ate While in DC For the WHCD

Share All sharing options for: Here's Where Celebrities Ate While in DC For the WHCD

This weekend was the annual White House Correspondents' Dinner, for which celebrities come to Washington to hear the president tell jokes and attend parties with media types. But where did the famous people dine other than the Washington Hilton? And did any of them take dining recommendations from fellow famous person Gwyneth Paltrow? Here we go: 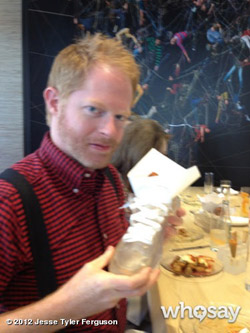 1) Alexandria: Reps send word that Twilight star Robert Pattinson stopped in at The Majestic on Saturday night with four friends. He ate a medium-rare steak, signed a menu for Cathal Armstrong's 13-year-old daughter Eve and apparently was the last to leave the restaurant at the end of the night. [EaterWire]

2) Penn Quarter: Modern Family actor Jesse Tyler Ferguson had lunch at the newly revamped Jaleo in Penn Quarter yesterday. Yes, he ate croquettes from a shoe, tweeting, "Fried food in a glass shoe!? Why not! Such an amazing lunch at Jaleo in DC! Thanks to the amazing staff!" [Twitter]

3) Logan Circle: Actress Kate Hudson and Muse frontman/fiance Matt Bellamy had brunch at Estadio on Saturday, per a rep. [EaterWire]

5) Georgetown: Sure, let's call California Lieutenant Governor Gavin Newsom a celebrity. He had dinner at Unum on Friday night, as did Supreme Court Justice Elena Kagan. They were in separate parties. [EaterWire]

6) Capitol Hill: Though it's unclear whether he attended any WHCD-related parties, Adrian Grenier was in town for a show at DC9 with his band The Honey Brothers. He had brunch at Art & Soul on Sunday morning. [EaterWire]

9) Penn Quarter: Another Woody Harrelson sighting at Rasika Penn Quarter on Friday night. Per a tipster, he was brought in from the back of the restaurant and dined with a few others. [Eater Tipline]

10) U Street: Seems to have been an abundance of celebrities at Marvin on Friday night. A tipster spotted Chace Crawford, Tony Romo and Matthew Morrison, who was eating steak. [Eater Tipline]

Did we miss any celebrity restaurant outings from the weekend? Let us know.