All the news you want to know about where you live from Curbed DC... 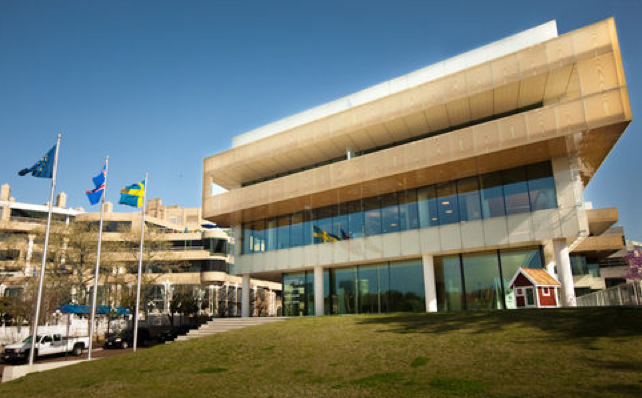 The Swedish Embassy has more architectural detail than we can describe in a caption.

GEORGETOWN—Lovers of contemporary architecture might want to check out our in-depth look at the Embassy Of Sweden. The glassy and dramatic building on the Georgetown Waterfront left no detail un-thought-about. From an art installation you follow around the whole building to tutu lampshades, we've got all the details.

BALTIMORE—Michael Phelps' townhouse hit the market last month for an undisclosed price, but now all has been revealed and the Olympian has listed it for $1.42M (about 200K less than he paid). We've got the pictures of what it looks like inside.

SILVER SPRING—Former Terps football coach Ralph Friedgen has sold his house for fifty thousand less than he wanted, but more than he paid ten years ago.

MT. VERNON SQUARE—The new huge building on L Street called the Meridian has started pre-leasing for their 390 units and we have floorplans.

NAVY YARD—Want more Foundry Lofts in your life? We've had a few sneak peaks at the units inside the building, but now we have a much more extensive look at what it would be like to live there.

REDSKINSWIRE—Santana Moss avoided foreclosure on his Florida house by selling for less than half what he paid for it six years ago. He bought it for just over $5M and sold it for just over $2M. If you want to see what it looks like inside, click on over.

POTOMAC—There's a $7.5M house that has what can only be described as a dungeon in the basement. Classy stonework, but a dungeon nonetheless.

HYATTSVILLE—We branched out again for our Least Expensive list and went to a place that can't decide if it wants to be a city or a suburb.

WHITE HOUSE—The Google Art Project has gone inside the White House for a high-res 3D tour you can take from the comfort of your internet-connected computer. Click over for more info.