GM Michael Iglesias on Getting a Table at Oyamel

Share All sharing options for: GM Michael Iglesias on Getting a Table at Oyamel 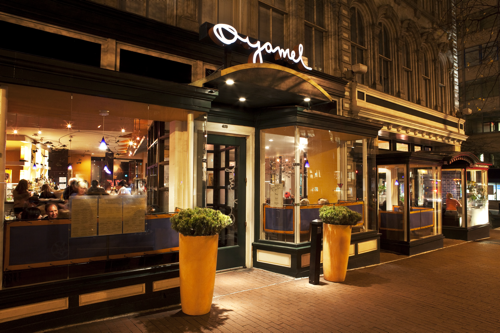 José Andrés originally opened Oyamel out in Crystal City back in 2004 and the Mexican restaurant moved to its current Penn Quarter location three years later. Now it remains an essential element of the chef's ever-growing restaurant empire — a place where Andrés brings pals and a hangout for people in the restaurant industry. General manager Michael Iglesias chats with Eater about getting a table at the perpetually popular Oyamel and what kinds of celebrities you might see when you get in — including José Andrés himself.

How many seats do you have?
We have 130 seats. We have a six-seat ceviche bar where guests can watch two chefs taking number one grade fish and literally slicing it off the loin and marinating the fish and then serving it right there. It's really cool, it's like a la minute ceviche. And then our bar seats 15 guests.

And which are your favorites?
We have a beautiful reclaimed wood table in our back dining room that José just had built. A big piece of oak that came from California. It's stunning. So that's one of my favorite tables in the restaurant. We call it José's table. We also have a round booth with a Lazy Susan in the middle of the dining room. That's pretty awesome.

Say it's 8 p.m. on a Saturday. What's the wait to get in?
Typically an hour and a half to two hours.

Is there anything I can say or do to make my wait shorter?
No. Everyone's been offered money at a certain point in their life at the front door and it's no different at Oyamel. But when I was thinking about this subject, really, if people are sweet and nice, we love doing random acts of kindness. So if there's a cancellation or something pops up a little bit faster... Sometimes we'll have tables check in all within a minute and they're all at the same point in the wait, we'll grab that person that was super sweet and we'll get them in just to be nice. So moral of the story, be nice to your host.

And so tell me about some of your favorite guests?
I'm sure you hear this a lot, but we love feeding local chefs, local restaurateurs. Our concept is really unique. When José was building the restaurant, he spent three months in Mexico eating with Diana Kennedy, who's a food anthropologist who has lived in Mexico for 50 years. So our concept is really about Mexican cuisine to the heart and then we take all the inventive, fun spirit of José Andrés and we make it modern, exciting. But the flavor is always really true. So when chefs sit down to eat at Oyamel, they get it, they dig it.

So who are some of these guests?
Sam Kass is in our restaurant twice a week, three times a week. He's a dear friend of José's. They have a good connection through the White House with all of José's work on childhood obesity and all of his work with Michelle Obama. So Sam's a dear friend. He loves eating ceviche. Sometimes he's just sitting there doing work. But we love taking care of Sam. Also Otto Hoernig, the owner of Casa Noble tequila, pops in on us three times a month, four times a month. And Otto's just a hoot because he lives and breathes tequila and absolutely adores Mexican cuisine. He's always got an entourage. He's partnered up with Santana, so we're hoping to see Carlos Santana someday soon at the restaurant.

And it seems José brings a lot of his friends in when they're in town.
Yeah, José rolls in when he's in town. He does the Penn Quarter walk. We know whether he's in town for two days, three days, three weeks, a month, we just expect to see him at any point of the day. He could spend an hour with us downstairs or he could just walk through the dining room. And he definitely brings in friends. I mean, the last time Ferran Adria was in town after the lecture they had [at GWU], José brought him into Oyamel and they sat at the bar and drank mezcal, salt-air margaritas and had guacamole. So José is definitely always throwing somebody into the mix, for sure.

And earlier this year the First Lady visited us and that was absolutely cool. She took over the whole back dining room. We get a lot of dignitaries. José doesn't tweet it, we don't talk about it, we like them to have privacy. But we also have a lot of people in Congress and a couple senators that visit the restaurant for lunch. Justice Sotomayor comes to the restaurant quite often. So we have very cool people that come in all the time.

How do you deal with it when VIPs like that come in but you don't have any tables available?
We work for José Andrés so we get inventive. We've been known to copacabana tables in our restaurant. I call it "copacabana-ing" a table, if you ever saw the movie Goodfellas. All of a sudden a little deuce will come from the back and we'll get plates in place. Maybe it'll go in the middle of two deuces and create a six-top. We build tables. We're very creative. I've been known to take an area that holds three four-tops and make it a 15. Even though the restaurant is small, we view it as a puzzle every night. But our bar and cocktail program also give people an opportunity to hang out, enjoy a drink. Give us 20 or 30 minutes, we can usually figure something out.

Can you order at the bar?
You can, yeah, a full dinner at the bar. Out of 15 stools, we'll definitely do 30 dinners at least at the bar.

And what's the most outrageous request that you have not been able to accommodate?
I hate to say it, but the outrageous requests that we get are typically around food allergies. We'll get people that come in and say, "no cilantro" in a Mexican restaurant, or no corn or no onions. But we really believe in the philosophy of yes and we really try to figure it out. We've accommodated a walk-in 40-top before that luckily came in the beginning of the night. Luckily it was a Monday night. So I can't say that we'll do absolutely anything, but we haven't gotten any outrageous requests like cellos or mariachi bands.

Back to the First Lady's visit, did you see a big jump in people trying to get in after she came?
There's buzz. So people will call on the phone and in the reservation will go, "Oh, was the First Lady there?" "Yes, she dined here." You hear it more in people's requests when they make a reservation. The First Lady's visit helped us out locally. But what José has been doing out in the community and in Time and James Beard has really propelled the restaurant into this place where people want to be seen. They want to go eat there, they want to try his cuisine, they want to see José's take on Mexican. I think Mexican food in general, with the help of José and Rick Bayliss, has really been coming into the limelight as a serious cuisine.

Do you have a lot of people coming in asking about José and to see if he's in that night?
Always. José, when he's in a restaurant, he will do the rounds. He's taking pictures, he's saying hello, he's shaking hands. He's always funny and charismatic and sweet. He's such a huge personality. Oyamel is José's baby and it's José's world.

Where do you eat when you're not there?
I love the menu and the wine program at Proof. They do a fantastic job. I like eating at Kushi. DC has got so much going on. We eat at our sister restaurants a lot. I love the new Jaleo. I think that Ramon has really just turned up the volume on the food. The Iberico sliders are incredible. So I like doing that. But I would say that when I get off of work, I tend to go have a glass of wine at Proof and have some sweetbreads and a pork chop.

And what's the one gatekeeper tool you need most to do your job?
I would say a great sense of humor. A great attitude. I absolutely have one of the best management teams I've ever worked with in my 24 years of being in this business. We'll do 500 dinners in a night consistently on the weekends, on Friday and Saturday. And that's a lot out of a little 130-seat restaurant. If I could take two tools, I'd like to keep my sense of humor with what's going on with our incredible team.