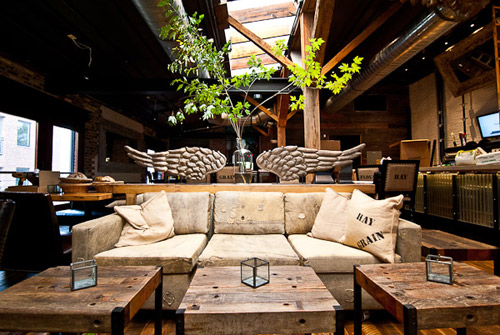 Cathal and Meshelle Armstrong opened their Irish-American twist of a tavern Virtue Feed & Grain in early June of last year, just another addition to their ever-growing Old Town Alexandria restaurant empire. Naturally, expectations were high given the couple's history running one of the Washington area's finest restaurants, Restaurant Eve. And, indeed, there were some bumpy reviews from both critics and diners — not to mention the legal battle with the Old Dominion Boat Club that still festers. But, as Meshelle Armstrong explains it, "You don't really figure out who you are until a year in." In the following interview, she rehashes the opening of Virtue and the challenges of defining a brand new concept.

How did the concept come about?
First of all, we've always loved this beautiful old building. It sat empty for years and it was an old bookstore. All of our buildings always had some connection to us in some weird fate way or another. I remember as a kid I used to come down to the Olsson's bookstore. So we've always loved the building. And it came to pass that one day we're like, oh my gosh, the building is available, we could rehabilitate it. What could we put there?

Cathal is Irish and it would be natural to open an Irish-style bar. Well, we didn't want to open the typical Irish-style bar so we're like, this is America. You're fusing both worlds. We'll open an Irish-American tavern. We have the fancy restaurant. We wanted to do something that was fun for us, places that we would want to go and hang out. So that's how the whole Virtue concept came about. Pub grub, great food, great quality, but easy peasy casual place where you can go and wear jeans and be comfortable. But, boy, when we first opened I don't think I'd received as many letters ever in the history of working in restaurants. We knew exactly what we wanted Virtue to be, but everybody else didn't know what they wanted Virtue to be.

What kind of letters?
All kinds of letters. I keep them. There's a certain pedigree that came with Restaurant Eve and so the expectations for Virtue were a lot higher than we had intended them to be. Of course, service is always paramount and quality of food is always paramount, but people were expecting more from Virtue. I'll give you an example, it still happens to this day: We serve our wine in stemless glasses. We do thousands of people on the weekend and it's for a couple of reasons. Oh my gosh, people cannot stand it. Seriously, it must be every night somebody says, "When are you all going to get stems on the glasses?" and things like that. So that's an example of what we've gone through with Virtue.

Have you made any changes based off of that kind of feedback?
No. You have to decide, are you going to persevere? Or do you acquiesce? But then the problem is that everyone else gets to dictate what you want to be. And then you lose the focus of, "Oh, well that's not our intention here. We created this concept for this, this and this reason." You state that. You have to be strong.

Have you made any changes on your own to better fit your vision for Virtue?
Definitely. You learn. The way we designed the menu was easy, fast pub grub, but tasty and made with quality. But then you listen to people and they're like, "Oh, we actually want more chicken wings." So you listen to a number of requests. Some of them, to us, that's just crazy. And the other ones, that actually makes sense, let's go ahead and do that, let's add more chicken wings to the menu. If something makes sense, we make the changes. But I just can't stand the wine thing. Sometimes I think I'm doing it out of spite. (laughs)

Did you encounter any other differences in opening this one as compared to your other restaurants?
This was the one that really socked us in the gut because we were so surprised. I had no idea. The concept was clear. It's a pub, it's a tavern, it's fun, you know? It's a bar. We really never intended it to be known as a restaurant restaurant. We just wanted a bar that you could go and hang out and play loud music. But people just wanted more. They wanted more food, they wanted more restaurant style, they wanted more service. They wanted just a little bit more of everything. So you have to adapt a little bit, but still stay true to who we are.

There's some things we're just not going to put on the menu. Everyone wants a hamburger on the menu. And we're not doing that. Because what happens is if you put a hamburger on the menu, guess what? They don't order all the other beautiful food that you're offering. So we'll do a hamburger as a special. And I don't want to be known as a hamburger joint. We put a lot of effort in our food. We still source from the same farms. Our chef is trained from Restaurant Eve. The quality is still there, you can expect that from us, but the setting and the mood is different. We're going to play crazy music, we're going to make it really loud. People are always like, "But it's so loud." And I feel like saying, "Well, there's 600 people in here. If you want quiet and cozy, go to Restaurant Eve."

And how was the buildout for Virtue?
Oh my God. Well, let's see. We had a lawsuit.

Yeah that was my follow-up.
It was an old historic building where no one would let us do anything. Building out this place now, you look at it and I love it. The city is so happy with us because we didn't create something that was loud and obnoxious. We tried to keep in the period being in an historic area. It was a fortune. We were a year behind or months behind. A lot of delays. And I love it. But it definitely was not easy.

What were some of the hurdles that delayed you?
Well, I tell people, if you're going to open a restaurant in an historic district, you better make sure that you double the money in your bank before you open. Frankly, I think that's why a lot of people don't come to Alexandria. Here it's all about roots. The historical foundations, they put you through the run-around. Like in other places, you can buy your furniture and put it on the patio. If you've an outdoor here, you have to go in front of a board and say, "This is the chair I've selected. This is the candleholder I've selected. This is the signage I want to put up." And 15 people have to approve you and if they don't, guess what? You have to go back and do it all over again.

And again, we're in disputes because of this historic alley that we revamped. It was tough because a lot of our regulars actually belong to the party who is disputing. You want to be happy-happy neighbors. But they're making it difficult, so sometimes we lose some people. They don't come here anymore because they think that we're wrong in what we're trying to do.

So what exactly happened there and what's the update?
It's really long and convoluted. It's going to the Supreme Court in Virginia. Basically, the long and short of it is the alley, Wales Alley, we rehabilitated. We spent $120,000 to brick it up, to fix it, to pave it and make it nice. The suit is really between the City of Alexandria and the Boat Club, whether we can actually put seats out here and use it from time to time. Because we were supposed to have block parties and we can't do that anymore until this is all settled. What they say is they use it to drive their boats through? No one has driven a boat through here. I've never seen a boat driven through here. They can go around the back. It doesn't make sense. We've made it beautiful and we can't use it.

We put security cameras up everywhere because when we first opened up they had people coming out here, they had pickets. It was crazy. You're opening and you're months behind schedule and then you have this opening to a group of people who are picketing you. So that's why I say it really tests who you are and your endurance. But we're still going strong. Fingers are crossed. We'll hear about the alley I think next week.

And so what's next for you?
We're going to lay low for awhile. The second Eamonn's is opening at the end of the summer. That one was always planned. Virtue was kind of a pop-up. Virtue was never in the cards to begin with. It just kind of presented itself. But with Eamonn's, with the next one we're pretty jazzed because we're opening TNT alongside it. That's a bar that's kind of attributed to Todd's son and it's going to have a rock-n-roll vibe. The scene is really cool. I'm designing it now. We're having a lot of fun with it. The Eamonn's is going to be bigger than what we have here. More seats and a little bit more fun food. Hopefully by the end of the summer we'll have that one open.

Great. And does it feel like it's been a year?
It has just flown by. I blink my eye and I can't believe it's been a year. But it has. Every year we do something fun and different to kind of mark the occasion. So this year, we're going to have a party [called] Little Black Dress to celebrate. Any girls who wear little black dresses, we'll give them cupcakes. It's illegal to give away alcohol, but if you're in here on our birthday...