Carolina Kitchen, Epic SmokeHouse and More on the Way

Share All sharing options for: Carolina Kitchen, Epic SmokeHouse and More on the Way 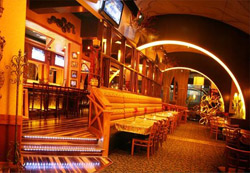 1) Rhode Island Avenue: The folks behind Rhode Island Avenue Insider hear that Carolina Kitchen is "coming soon" to Rhode Island Row, per a postcard received in the mail. The restaurant has location in Hyattsville and Largo already, serving things like smothered fried chicken and Cajun grilled pork chop. [PRE-PLYWOOD]

2) Pentagon City: The City Paper reports that two former employees of The Palm are opening a restaurant named Epic SmokeHouse near Pentagon City Mall. Apparently it "will be somewhere between a fine dining steakhouse and a barbecue joint, with dishes like horseradish-crusted smoked prime rib and ancho-crusted smoked sea bass atop butter-poached portobellos in a miso broth." It's on track to open this summer. [PLYWOOD]

3) Ballston: The Washington Business Journal has it that Leek American Bistro is headed to Ballston with chef Nathan Spittal — formerly of Nathan's, the Caucus Room and BBQ Banditos — in the kitchen. The plan is "upscale American food" with a casual vibe, to open in the late summer or fall. [PRE-PLYWOOD]

4) Dupont Circle: Prince of Petworth hears that Jamba Juice is opening a location in the old Ben & Jerry's space in Dupont Circle. [PLYWOOD]

6) Capitol Hill: A tipster writes in with the report that "Hanks on the Hill has papered windows on Pennsylvania SE in the former Ba Bay space. The construction began within the last week or so. The Ba Bay signage is down." [PLYWOOD]