Share All sharing options for: A Belgian Bistro, Aroi Thai Sushi Bar, More on the Way 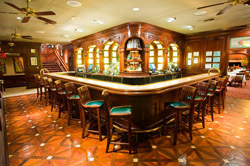 1) Adams Morgan: Prince of Petworth spots a liquor license for a Belgian bistro and brewpub headed to the old Duchess and The Queen space on 18th Street. [PLYWOOD]

2) Bloomingdale: PoP also has it that Aroi Thai Sushi Bar is headed to Bloomingdale and that the space is looking close to completed. [PLYWOOD]

3) Downtown: The Washington Post reports on a possible second DC location for Dallas-based Del Frisco's, which is in negotiations with CityCenter DC to bring their Double Eagle Steak House to the development. Per the VP of development over at the restaurant group, "It’s just simply a matter of concluding the negotiations and getting it signed." [PRE-PLYWOOD]

4) U Street: The City Paper has an update on the restaurant from the group behind 901 and Capitol City Brewing Company destined for the space next to Vida Fitness. Turns out there is still not a concept and no one should expect one anytime soon as they don't plan to start working on the restaurant until next year. [PRE-PLYWOOD]

5) Crystal City: ARLnow reports that California Tortilla is opening in Crystal City, next to Buffalo Wild Wings. It's the chain's third Arlington location and expects to open in late summer or early fall. [PLYWOOD]