Share All sharing options for: The Ultimate Pizza Glossary For Washington, DC

Washingtonians are snobby about a lot of things—what they read, what they listen to, and most importantly what they eat and drink. Please see the coffee snob, the pizza snob, the cocktail snob, the sushi snob. And here now, for the people who don't know what the hell they're talking about, some primers. Welcome to A Snob's Guide. 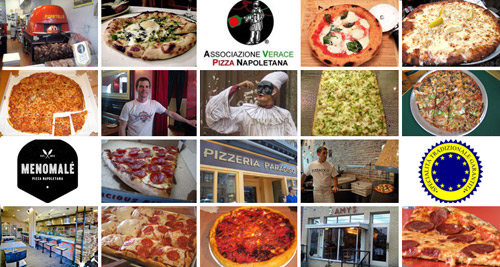 Pizza is a food that inspires deep passion among many people. For many it's a comfort food they ate at least once a week when they were growing up. It's the food they flee to when they're drunk, hungover, or celebrating. Naturally, it makes them dogmatic about who makes it best or what defines a style. And they hold dear regional styles that may be exclusive to a small group of local pizzerias.

While pizza may have Italian roots, Americans clearly have taken it deep into their hearts. A guide may not ever be exhaustive enough, but to get you started, here's a Snob's Guide to pizza in DC — full of tips on the different styles and best places to find what you're looking for, all in glossary form.

2 Amys: The reigning don of pizza in DC, it was the first certified Neapolitan pizza restaurant. Opened by Obelisk owner/chef Peter Pastan in late 2001, it ignited a slew of imitators selling wood-fired, thin-crust pizzas. The restaurant also has an excellent program of wine and beers that are just rustic enough for pizza.

apizza, New Haven style: Typically coal fired, New Haven-style pizzas are thin crust with tomato sauce, oregano, and a little bit of pecorino romano. However, the style has become more recognizable by its white clam pizza with fresh littlenecks, oregano, chopped garlic, and grated pecorino. You can try it at Pete's Apizza and Haven.

California style: Often called "gourmet pizza," it started at Alice Waters' Chez Panisse where a wood-fired crust was covered with unusual (for pizza) toppings. It was popularized by Ed LaDou at Wolfgang Puck's Spago, who later took it national with barbecue chicken pizzas and the like at California Pizza Kitchen. You can get a peking duck pizza at the Clarendon American Tap Room that is representative of the style.

Chicago deep dish: One of the better-known pizza styles, it features a cornmeal-based crust with edges several inches high. It's filled up, in order, with a layer of mozzarella cheese, meat and veggie toppings, chunky tomato sauce, and then grated cheese. You can get a Chicago-style deep dish at Alberto's.

Chicago thin crust: It resembles a New York-style pizza, except it has a thin, cracker-like crust with an almost pastry texture. The sauce is highly spiced and very smooth, and is often topped with mozzarella. Despite being round it's cut into squares or rectangles (tavern cut). You can try it at Alberto's.

Coal-fired ovens: Many pizzerias are returning to the use of coal-fired pizza ovens. (Grimaldi's in New York is one of the best known users of coal.) Coal ovens burn hotter than wood-fired ovens, resulting in a crispier crust and a slight difference in flavor. You can try pizza from coal ovens in Maryland at Haven, Coal Fire or Joe Squared.

Fried pizza (pizza al tegame): This is a pizza style that has recently come into vogue. While it might seem like some recent gluttonous mashup, it actually has been in Italian cuisine for a while. The dough uses baking powder instead of yeast, which is then fried. The baking powder speeds the rate the dough rises, which decreases the overall preparation time. In the end it makes a crisp, voluminous crust. Sadly, this style has yet to make its way to DC.

Jumbo slice: There is really only one defining feature of the jumbo slice – its size. The pizzas are baked on pans that range from 24 to 32 inches in diameter, the result of Adams Morgan jumbo slice purveyors trying to win the size war. Most come in at more than 1,000 calories per slice, and, as most fans know, the only special method in the recipe is the consumer's level of intoxication.

La Forchetta: One of the latest competitors to jump into the Neapolitan pizza scene. With chef Roberto Donna donning the toque and pizzaiolo Panetta Giuseppe making the pizza, they are a serious challenger for Neapolitan supremacy.

Lazio style: This style of pizza is shaped in rectangular sheets with a crisp crust that is about half an inch thick. The original recipe features onions and oil with no tomato. Nowadays there is more variation in toppings that include tomato, prosciutto, mushrooms and other options. On the streets of Rome the slices are often sold by weight. Sadly, this style is not available in DC, but seems like a worthy competitor to the jumbo slice.

Edan MacQuaid: If anyone is a rock star in the DC pizza business it's pizzaiolo Edan MacQuaid. MacQuaid got his start at Pizzeria Paradiso and 2 Amys, where he honed his Neapolitan pizza-making skills. He moved on to consulting at RedRocks, a stint at Pizzeria Orso, and finally landed at Local 16. MacQuaid plans to open his own pizza place on 14th Street with Local 16 partner Aman Ayoubi this fall.

Menomalé: It's the latest pizza joint to join the Neapolitan ranks. Making it noteworthy is not only VPN-certified pizzaiolo Ettore Rusciano and the sourcing of ingredients from the Campania region of Italy, but also a certified beer server, Leland Estes, who runs the beer program.

Neapolitan style: The original Italian pizza, it's a thin, wood-fired crust topped with uncooked tomato sauce, and fresh mozzarella. It is the most widely imitated style, leading the Italian government to set up regulations outlining what makes a Neapolitan pizza.

Pizza Napoletana STG (Specialita' Traditionale Garantita): These pizzas are made exactly to the specifications laid out by Italian Ministry of Agriculture. Along with specifying the ingredients: 00 flour, San Marzano tomatoes, all natural fresh mozzarella, fresh basil, and fresh yeast, it dictates the preparation of the dough (proofing time, pH, and temperature), preparation of sauce, assembly of the ingredients, cooking time and temperature, and size.

New York style: When people think of pizza, odds are that New York-style is probably the closest to what springs to mind. The ideal New York-style pizza is a thin, hand-tossed crust made of high-gluten bread flour that is both crispy and chewy. It's finished off with cooked tomato sauce and mozzarella. It's what most of the major pizza delivery chains in the US aspire to, yet fail to achieve. No person in their right mind would make a recommendation of a best New York-style in DC.

Pizzaiolo: The person who is responsible for making the pizza, from making the dough to its cooking. The most well-known pizzaiolo in D.C. are Edan MacQuaid (Local 16) and Enzo Algarme (Pupatella).

Pizzeria Paradiso: It's the godfather of thin crust pizza in DC. Even though 2 Amys has usurped Paradiso's critical position at the top of the thin crust pizza heap, Paradiso still cranks out a solid thin crust pizza. And the excellent beer list managed by Greg Jasgur makes a worthy accompaniment.

Pulcinella: This slightly creepy jester character from Italian comedies sports a puffy white outfit, floppy long white hat, and a black mask with elongated nose. You'll often spot him in Neapolitan pizza joints as a representation of the common man, who happens to enjoy a rough, rustic pizza.

Pupatella: The restaurant owned by Anastaysia Laufenberg and her pizzaiolo husband Enzo Algarme started as a food cart near Ballston Metro station. The transition gave them a chance to use a proper wood-fired pizza oven to make their certified Neapolitan pizza with San Marzano tomatoes, and fresh buffalo mozzarella.

Sicilian-American style: Most recognizable by its square shape, this pizza has an inch-thick crust, and a dense quantity of garlicky tomato sauce and cheese. This is different from the Sicilian pizza in Italy, where there are a wider variety of "Sicilian-style" pizzas, including the sfincione with bread crumbs, anchovies, and onion. Surprisingly the American version seems to crop up in DC only from national delivery chains.

St. Louis style: This style of pizza features a thin cracker-like crust that has a similar appearance to Chicago thin crust. However, this one is made without yeast, is meant to be a conveyance for the toppings, and features a tavern cut. One of the most-mentioned, but not required elements of St. Louis-style pizza is Provel - a blend of provolone, swiss and white cheddar cheese. The District of Pi thin crust eschews the Provel, and includes cornmeal in the crust.