Share All sharing options for: Antique Meat Lockers; A Good Deal In Foggy Bottom; An Expensive Deal In Georgetown; More!

All the latest news about the places you live from Curbed DC... 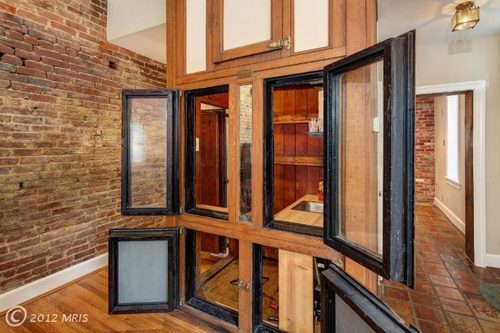 This is what meat lockers looked like in the olden days.

CAPITOL HILL—There's a house that went under contract after only a few days but you still might want to take a look at it since there's an antique meat locker that has been turned into a wet bar.

MT VERNON TRIANGLE—There's a new 390-unit building called the Meridian at Mt. Vernon Triangle that let us inside to take some pictures of their apartments. We have the interiors and a price list for you to check out. Studios start at around $1,900.

FOGGY BOTTOM—Surely this studio qualifies as having the best asset out there. Not only is it affordable ($199,000), but it comes with free parking for a year.

MERIDIAN HILL—We made a few jokes about drum circles this week since we looked at the least expensive places to buy in the Meridian Hill neighborhood, but is that is too much commitment for you we also found some places to rent for under $1,500.

GEORGETOWN—There's a rowhouse for sale asking the staggering price of $1,000 per square foot. Yes, it is stunning.

RACKED—Our look at everything fashionable mentions the Betsey Johnson store closing down, a former food truck that is now a purveyor of high-end fashion items, and the annual Tudor Place garden party that is really just an excuse for people to wear fancy hats.

MUSEUMWIRE—The next exhibit for the National Building Museum focuses on the designs of Kevin Roche who is behind several large-scale projects in DC (plus some others that he worked on with Eero Saarinen, architect of Dulles Airport). We have some preview pictures before the event that begins June 16th.

BETHESDA—Architect Robert Gurney known for contemporary houses with plenty of glassy angles also designs pool houses, such as this one that contains all his design features on a smaller scale.