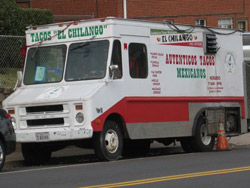 1) U Street: The City Paper discovers that super popular Arlington food truck Tacos El Chilango is opening a brick-and-mortar location near U Street at what was going to become the Italiano Cafe space. Opening in as soon as a month, it'll have tacos enchiladas, pozole soup and more. [PLYWOOD]

2) Bethesda: The Washington Post has it that Jeffrey Yu, the son of Hollywood East's owner, is opening a spot named Dumpling Dojo in the Westfield Montgomery Mall by July 1. After that? A doughnut shop. [PLYWOOD]

4) Georgetown: The Post learned a couple months ago that the Connecticut-Copperthite Pie Company was going to be resurrected in Georgetown and now the City Paper gets some more details. It will be named Shut Your Pie Hole and it's still finalizing a lease. [PRE-PLYWOOD]