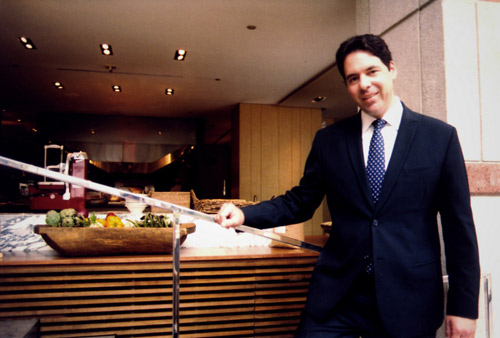 Long a spot to spy DC's political power players from its perch within the Park Hyatt, Blue Duck Tavern is also consistently the subject of many a restaurant recommendation — meaning it's not so easy to get in without a reservation. A visit from the First Couple on their anniversary and the bump up to three stars in Tom Sietsema's Spring Dining Guide sure hasn't made getting a table any easier over time either. For the latest edition of The Gatekeepers, general manager Joseph Cerione shares a few tips on getting a table — such as perhaps one of those ghost tables Blue Duck Tavern reserves for hotel guests and VIPs.

Say it's 8 p.m. on a Saturday night. What's the wait for a table?
8 p.m. on a Saturday night would be reservation only. However, we do have somewhat of a juggling act that we are required to do in the sense that since we are part of the Park Hyatt hotel, we have to cater to our hotel guests as well. That said, they have preferential seating as well. We do take reservations, we're very much a neighborhood restaurant and always very busy, most of the time fully committed, especially on weekends, but we do reserve two to five tables at the very most for hotel guests.

So every night you would have two to five tables held just in case?
Yes. And I would say 100 percent of the time those tables are taken.

Is there anything I could say or do to make my wait shorter other than be a hotel guest?
Other than paying $400 a night to stay in the hotel? Well, I think a good tactic would be to try to speak with a manager and mention that you've heard great things about the restaurant and are interested in trying it out. We're very much open to having new diners. We have a very, very strong local, regular clientele. At the same time, we want to expand our clientele to others as well. So we value the first-time diner as well.

I think the best way is to ask to speak with a manager, especially if it's a special occasion. That way we can do our best to get you in. The difficulty for us as managers is we have a team of people that answer the phones. And in order to control our seating so that it's manageable and that we don't inconvenience or upset any guests, we have to limit their ability to make reservations. Their ability is somewhat limited in being able to make those exceptions. So speaking to the manager would supersede that process a little bit more.

Has anybody ever tried to slip you money or gifts?
That's not something that I would ever condone in getting a table.

But have a lot of people attempted it?
No. Honestly, that has fallen to the wayside in my experience in the last two years or so. I don't know if it's this particular location, but I'm not seeing as much of that as I did in the past. In Miami, I saw it quite often. But I will say it was more prevalent there than I've seen in DC.

Tell me about some of your favorite customers.
There's quite a range. There's a lot from the government, our embassies, ambassadors, diplomats, of that sort. We have other sorts of politicians that are regulars.

Which ones?
I'm a little hesitant to say. I know when we discuss this in PR meetings whether we actually want to name names, we decided against it. But one that seems to be more public information is the Obamas celebrated their anniversary here last year.

What was that like for you guys?
Well, of course it's great for the recognition and the fact that someone of his stature can have the confidence in our restaurant to be discreet and attentive. And, of course, from an operational standpoint, quite hectic because all eyes are on the restaurant.

Have you seen an Obama bump?
It's hard to say. We remain consistently busy. It can be attributed to a variety of things, too. We do a lot of special events. We do our Masters of Food & Wine, which gets picked up in the newspapers. We recently received three stars from Tom Sietsema, which hasn't been done before. Last time he reviewed us was in '06, so it had been several years. So I think being featured in the Spring Dining Guide could attribute to that as well.

One of the other marketing ventures that we've been doing is something we call the Influential Breakfast, kind of a play on the power breakfast. We've moved breakfast from the lounge to the restaurant and changed the menu somewhat in the sense that it's more neighborhood-friendly as far as pricing and has a Southern influence to the cuisine. We have short-rib hash, biscuits and gravy, fried chicken and waffles, dishes like that. A little kind of off the norm from a traditional hotel breakfast. We've certainly seen an increase in the last month.

I know you want to be discreet, but I'm wondering if you have any big celebrity names or stories that you could share?
Let's see. Kate Hudson and Reese Witherspoon were here after the White House Correspondents Dinner. Jonathan Capehart is one of our very regular VIPs. He's on Morning Joe quite often... Very nice gentleman and frequents the restaurant as well. We had Valerie Jarrett, she's an adviser to Obama. Who's the one from Florida? The female representative?

Debbie Wasserman-Schultz?
That's the one.

And how do you deal with your VIPs when you don't have any tables available?
Well, that's where those ghost tables come in handy that we reserve for hotel guests, but they're also our VIPs that we seat no matter what.

What if there's a hotel guest and a VIP?
There's always those situations and we hope for them to be as infrequent as possible. But we do have some alternatives in the lounge. We have four glass-enclosed booths in the lounge, and we'll offer the full dining room menu as another alternative. It's about communicating to our hotel guests as well that the restaurant is very busy and reservations are strongly recommended.

Are there any outrageous requests that you haven't been able to accommodate?
No and that's the thing. If someone would like something, we will go to Whole Foods or Trader Joe's or wherever we need to go in order to accommodate.

Have you had to go to Whole Foods or Trader Joe's?
Yeah. We had someone who had very strict dietary considerations and it was to the point where it was beyond food groups and become almost fish species-specific. She could have Dover sole, but she couldn't have flounder, which are in the same family. And so there was pasta that could be made, it had to be fresh pasta but made without any egg. These kinds of things. We were running out to Whole Foods to buy the Dover sole for her.

Was that a VIP?
No, not necessarily. A hotel guest who had communicated a lot of this prior to her arrival. But it was just a lengthy list of things that we needed to accommodate.

Where do you eat when you're not at work?
I'm still working on that. When am I not at work? I like to cook at home and most recently I ate at Mintwood, which I enjoyed. And I enjoy sushi. Raku, I live in Bethesda.

And what's the one Gatekeeper tool that you need the most to do your job?
Patience. It's important to remain calm and be able to negotiate the situation and to be able to allow the guest to feel comfortable that they're able to handle any problems that may arise regarding their reservations or their planned events. So calm and patience.