The Greenest House; Prices Released For Aston on 14th

Share All sharing options for: The Greenest House; Prices Released For Aston on 14th 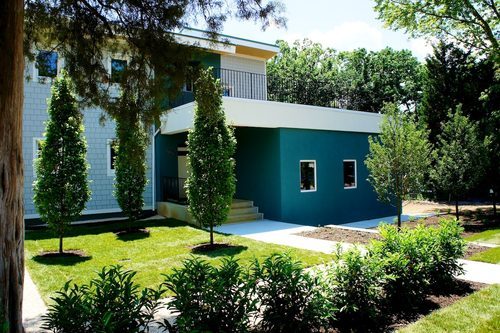 The newest Passive House for the area is now for sale.

ARLINGTON—The greenest house around is the new-to-market Passive House in Arlington's Barcroft neighborhood. It uses the equivalent of two hairdryers worth of energy to control the temperature of the house and has many more green features which we've detailed in a photo gallery. They are hosting tours this Saturday for anyone interested in learning more about it (not just potential buyers).

MONEY MAPPING—This week was the week when we put together a heat map of median sales prices for each zip code for last month. Overall prices went up, but there are still parts of the city with very little activity.

14TH ST—One of the many new buildings going up on 14th is the Aston, a set of 31 luxury condos with prices starting at $299,900. We have the full price list and a set of floorplans on Curbed. The building won't be finished until fall, but units are already starting to sell.

AFFORDABLE LIVING—This week we found a condo that is in great condition and cheap (90K, to be exact). It is near Gallaudet and part of the Greenview Condos development. Then our weekly list of least expensive properties took us to H Street, where we also found some rentals for less than $1,500.

GEORGETOWN—There's a penthouse condo for sale in the Ritz Carlton for about $4M that brings both a minimalist aesthetic and an 80s flashback to the market.

LOGAN CIRCLE—Old City Green has been told to move out by their landlords, Douglas Development because the double D is going to build a 70-unit building on that corner in partnership with CAS Riegler. The renderings for the building have been released, which likely means Old City Green won't be able to talk them into letting them stay longer.

FRANK LLOYD WRIGHT WIRE—Since last week would have been this guy's 145th birthday we found a few item of interest, such as a video clip of architect Phillip Johnson discussing why he didn't like FLW and some of Wright's lesser known work in graphic design.

CHURCH CONVERSIONS—The former Capitol Hill church called St. Monica's that has been turned into nine luxury condos just won't let us stop thinking about it. The most expensive unit, a three bedroom, has finally released enough pictures for us to see what it is really like. It has also come down to less than $900K, after starting out at $1.2M.