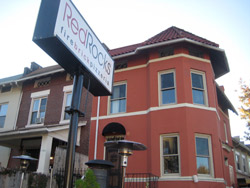 1) Columbia Pike: ARLnow has the news that RedRocks Pizzeria is expanding to Arlington, joining a slew of restaurants opening up locations in the Penrose Square development. This will be the third location of the Neapolitan-style pizzeria, which also has spots in Columbia Heights and Old Town Alexandria. No word on when it'll open, though ARLnow notes it looks to be in "early pre-buildout stages." [PLYWOOD]

2) Glover Park: Prince of Petworth hears from the owners of a forthcoming pho shop in Glover Park and learns that they're going to be called Sprig & Sprout. Though the whole place is "fast & casual," the street level is mainly going to be takeout-oriented while there will be a full-service bar upstairs for those who want to stick around. [PLYWOOD]

3) Trinidad: The City Paper has it that Trinidad is getting a carryout sandwich shop named Mother Ruckers Subs in the old Sullivan's Southern Style Seafood space. With the aim to open in October, the shop will have about 20 sandwiches on the menu, plus "bread-less 'subs in a bowl.'" [PLYWOOD]

4) Rockville: A Japanese tapas restaurant named Azuma Izakaya is headed to Rockville, per a Craigslist ad seeking "all talented individuals... whether you're a actor/actress, model, musician, artist, student or professional server!" The izakaya is apparently hoping to open this month and will offer robata and shabu shabu. [PLYWOOD]

5) Penn Quarter: The Post confirms that the Riot Act Comedy Theatre is not just closing for a facelift, but will transform into Penn Social in July. The new iteration of the space will be "packed with games, TV screens and bars in a format that seems closer to ESPN Zone than the Improv." [PLYWOOD]

6) Logan Circle: More in switcheroos, PoP reports that Lalibela Ethiopian Restaurant is moving a few doors down into the old Playbill space next month. [PRE-PLYWOOD]

7) Ballston: And finally in rebranding, ARLnow has word that Caribbean Breeze is transforming into A-Town Bar and Grill with an expanded beer list, improved patio space, live entertainment and a menu with a little bit of everything, including "sushi, sandwiches, flatbread pizzas and steaks." The farewell party is on Saturday and the place is expected to reopen in August. [PLYWOOD]